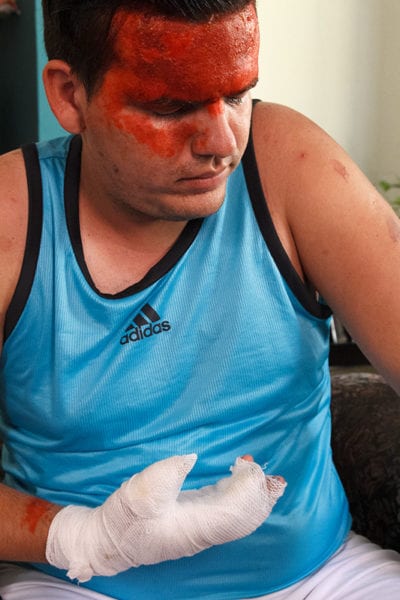 HAVANA TIMES — My neighbor Fermin bought 10 pesos worth of Cuban rissoles last Friday at La Demajagua, a peso-establishment located on Ayesteran, in Havana’s neighborhood of Cerro. That same day, he fried them to prepare a typical Cuban meal.

He says he took them out of the freezer, put them on a frying pan and, once they were done and on a plate, one of them exploded and went flying off, hitting him on his back while he was looking for water in the fridge. Allegedly, the rissole caused him no injuries.

The next day, his step-son Leandro decided to fry another handful of rissoles. When he was taking the rissoles out of the frying pan, some began to pop and squirted the boiling-hot oil on his face, eyes, hand and other parts of his body, burning his cornea and causing second-degree burns on his skin.

The kitchen was a mess. The oil reached as high as the ceiling. At the hospital, the doctor who saw him told him he had seen several other cases of burns caused by rissoles.

It is said the rissoles pop because they use sodium bicarbonate to fatten the dough. Similar incidents took place years ago – the rissoles would explode on the frying pan – and it looks like we’re seeing them again.

Leandro is a university student. As a result of the burns, he can’t open his eyes and must stay home for at least fifteen days. Many people have bought these rissoles and I’ve heard the occasional comment about them. If people are still buying these, I warn them be very careful.