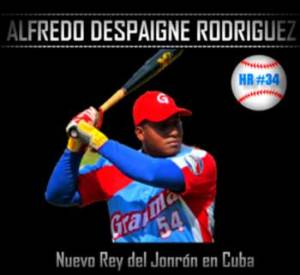 It was the first of two loud Despaigne cannon shots on the night that highlighted a 21-10 romp over Havana Industriales before an enthusiastic crowd announced at slightly above 12,000 partisans. Despaigne’s two homers capped a season-long pursuit of a new league home run standard that the Granma slugger himself had surrendered only one season back.

The historic blast number 33 to topple the old record (set by José Dariel Abreu and Yoennis Céspedes in National Series #50) came off a delivery from Industriales southpaw Ian Rendón. Four innings later Despaigne punctuated his historic night by belting a second round tripper off reliever Roberto Santiesteban. On the night the Granma Stallion (known in Cuba as “El Caballo de los Caballos”) also added five RBI to his season’s total, leaving him now only 13 short of the league record of Alexei Bell (111) set in National Series #47 (2008). Yulieski Gourriel is the only other Cuban Leaguer to reach triple figures (with 105 in NS #49) in the RBI column.

Despaigne saved the island’s biggest stage (spacious and historic Latin American Stadium) for his record-setting performance and he also banged out the record breaker in spectacular fashion – a 400 foot line drive on which his bat broke off at the handle as he made contact with the Mizuno 200 baseball. Only a slugger of Despaigne’s extraordinary strength could club a ball that far on a swing that left him with only the bat handle remaining in his grasp.

With eleven games remaining in the season Despaigne now sits in a position to further extend the record he himself last held after the 2009-2010 season (when he belted 32 in the 90-game campaign). Despaigne lost that mark to Abreu and Céspedes last winter when he trailed the pair by a half dozen, despite missing the entire first month of the season while on a government-sponsored mission to the World Youth Congress. After being held to 27 long balls (in only 67 games) last season, Despaigne exploded in the post-season where he added six more for a final total of 33 on the year. In Cuban League play homers hit during the playoffs are added to career totals but do not count toward single-season records. Last night’s dramatic pair of blasts lifted Despaigne’s lifetime total to 199 (this is his eighth season) leaving him now on the doorstep of still another impressive career milestone.

Home Runs versus Pitching Orientation: against right-handers (29), against left-handers (6)