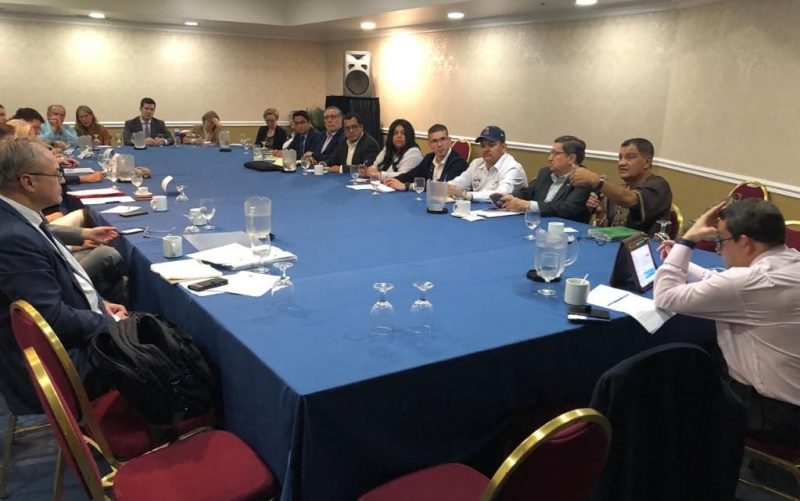 They met with opponents of the Ortega regime in El Salvador because Ortega prevented them from entering the country. They confirm “coordination” with the United States to impose sanctions.

HAVANA TIMES – A delegation of European Parliament Members (MEPs) held a meeting on Monday with leaders of the Nicaraguan opposition in El Salvador, because the regime of Daniel Ortega and Rosario Murillo blocked their entry into the country.

The legislators were updated on the current socio-political situation and confirmed that they are effectively “coordinating” with the United States the possibility of sanctions against the regime.

They showed peculiar interest in the role of Vice President Rosario Murillo, the Nicaraguan Army and names of companies associated with the government.

The meeting lasted two hours and the Nicaraguan opposition urged the MEPs to “act now” against the regime. “The euro deputies are aware of the situation of human rights violations and breaches of the agreements that the regime signed with the Civic Alliance,” said Guillermo Incer, a member of the political council of UNAB.

According to Incer, although European lawmakers did not specify when they could apply sanctions to the regime, they said they were “on the table.”

Last week, Hugo Rodríguez, Assistant Secretary of State for Central America of the Office of Affairs of the Western Hemisphere of the United States, announced that they are lobbying their European partners to apply sanctions against the regime of Daniel Ortega and Rosario Murillo, just as Washington has done.

The official informed from Brussels – headquarters of the European Parliament – that they discussed with the European countries how to contribute to “restore democracy” in Nicaragua through “genuine freedom and fair elections.”

Incer said they urged the MEPs to “not be fooled” by the “small gestures” of the government, such as the release of paper and ink to the newspaper La Prensa, after holding in Customs for nearly a year and a half. “The regime did this to buy time since it doesn’t allow civic freedoms. We ask you to be more agile and coordinate actions with the United States, because the humanitarian crisis of the exiles and the internal crisis continues. Time is pressing,” he said.

The talk was also dominated by the demand for a fundamental electoral reform that allows credible and auditable elections to be held. “We also ask you not to accept a unilateral reform by the dictatorship that excludes the opposition. They further discussed the need for a cessation of repression and political prisoners,” said Incer.

According to the participants of the meeting, the legislators stressed that the Ortega Murillo regime has ignored the recommendations that the European Parliament made in December through a resolution. This resolution proposed the cessation of repression, to resume political dialogue, the dismantling of paramilitaries and the release of all political prisoners.

“They showed a willingness to have the best coordination of concerted actions between the country, the United States and the European Union in order to achieve a serious commitment towards ending the crisis, which includes the agreements already reached regarding the release of prisoners and citizen freedoms and guarantees, as well as the subject of electoral reforms with national and international observation,” said Mario Arana, a member of the Civic Alliance.