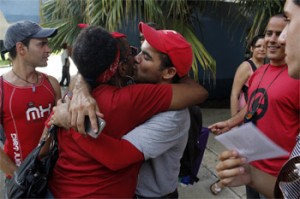 HAVANA TIMES — A public gay kissing session concluded peacefully in front of the main Havana bus terminal on Friday as part of the celebrations for LGBT Pride Day.

The gathering, organized by the “Proyecto Arcoiris” (Rainbow Project), involved some 20 people of different sexual orientations participating in the action to demand the right to express love and affection publicly, without discrimination.

Yasmin S. Portals Machado, one of the coordinators of the project, said there was no interference of any kind, which fulfilled the action’s aim of setting standards for the peaceful acceptance of the plurality of expressions by gender.

Present were representatives of several media outlets, who spoke with the participants, while the police respected the event, and people passing through this busy area of the city appeared curious but were tolerant of what was occurring there.

According to the previously circulated announcement for the initiative: “As May 17 (“Day against Homophobia) reminds us of the need for constant struggle against homophobia, June 28 (Gay Pride Day) seeks to vindicate the right to the use of public space – equally with heterosexuals. This is why we are calling for a besada (kissing session). Kissing is a sign of everyday affection, but in the eyes of many people it constitutes a “public scandal” if it occurs between non-heterosexual people.”

This was, therefore, an original and pioneering effort to achieve public acceptance of gestures that while some people tend to value as “normal,” others find upsetting.

The place where the “besada” took place was centrally located, close to the offices of the Ministry of Communications, the Ministry of the Interior, the Central Committee of the Communist Party, the Council of State and Ministers of the Republic of Cuba, a multipurpose sports center, the National Library and the Institute of Cultural Research.

The participants in Proyecto Arcoiris — who define themselves as “anti-capitalists” in relation to the changes taking place in Cuba — handed out fliers explaining the meaning of the action. The organizers suggested that participants wear “something red” on their clothing or accessories, and the mobilization took place according to the “flashmob” method (which involves assembling suddenly to perform an unusual and seemingly pointless act for a brief time, then dispersing, often for the purposes artistic expression).