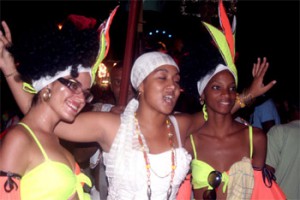 HAVANA TIMES — This year’s Havana carnival takes place in the Cuban capital from August 8 to 17 (9 pm – 2 am). The traditional masquerades and float parade will advance down the city’s “malecon” ocean drive, from 19th to Marina St, reported Granma daily.

The shows Muñecones (“Life Size Puppets”) and Carnavaleando (“Carnival Time”) will be staged by dance companies such as the Conjunto Folclorico Nacional, the Cuban Television Ballet company and Caribbean Dance. The carnival will also see the participation of top-level bands such as Maykel Blanco y Salsa Mayor, Las Anacaonas, Aragon, Azucar Negra and others.

“It will be a party for the entire Cuban family,” the Organizing Committee declared during a press conference, announcing that tickets for this popular festivity will be made available as of August 1 at Havana’s Payret, Lido and Acapulco movie theaters, as well as at Coppelita located at the intersection of Malecon and 25th St. Tickets to the Fiesta Infantil (“Children’s Party”), to be held at Ciudad Deportiva on August 13, will also be sold at the Payret and Lido theaters. The activities will include a homage to the late Teresita Fernandez and filmmaker Juan Padron.

Dance lovers will be able to give it all on the Carnival’s parade days at the esplanade before the Anti-Imperialist Bandstand, where renowned groups will play starting at 10 pm.

The joy of the occasion will spread across Havana. Competing floats will travel across the capital, taking their contagious rhythms and dance steps to the people and treating them to colorful costumes and choreographies.

On Tuesday, July 29, the carnival will start its engines with the awards ceremony for the children’s visual arts competitions Com ven los niños el carnaval (“How Children See the Carnival”), Mi disfraz de carnaval (“My Carnival Costume”) and Parejas de Baile (“Dance Partners”), to be held at the Plaza de la Revolución Cultural Center at 3 pm. The Bautizos de Farolas (“Float Baptisms”) will be held from July 31 to August 7.

In addition to the cultural activities held as part of the carnival, the population will be treated to a varied food offer across from the parade and surrounding areas. These locales will be open before the start of the carnival, one of Cuba’s most important of cultural festivities.

2 thoughts on “Havana Prepares for Carnival in August”