Rains until the weekend

HAVANA TIMES – Tropical Storm Sam in the central Atlantic continues to intensify as it moves westward, and is expected to become a major hurricane in the next two days. Currently its minimum central pressure is 1003 mb and its maximum sustained winds are 85 km/h, extending in a radius of 75 km around the center. At the moment it does not represent a threat to the Caribbean.

Meanwhile, in the Gulf of Mexico, the cold front number 1 of the season is advancing towards the south, it is expected that within a few hours it will become stationary and dissipate, but it will be causing some rains in the area ahead of the front, which will affect the northwestern coast of the island mainly this Friday.

This forecast week we will have some showers in the afternoon, with storms on Friday, and partly cloudy days starting on the weekend. The winds will be from the east and southeast in the mornings, turning from the northeast in the afternoons and at night, with speeds between 10 and 25 km/h. Relative humidity will remain very high, with lows between 40 and 50% and highs around 98%. The high temperatures will remain between 30 and 32° C (86 and 90 F), and in the early morning the lows will be at 24 and 25° C (75 and 77 F). The sea surface temperature will remain at 29° C (84 F).

Over the North Atlantic, the Gulf of Mexico and the Caribbean Sea the probability of new tropical cyclone formation will be low during the next 5 days. 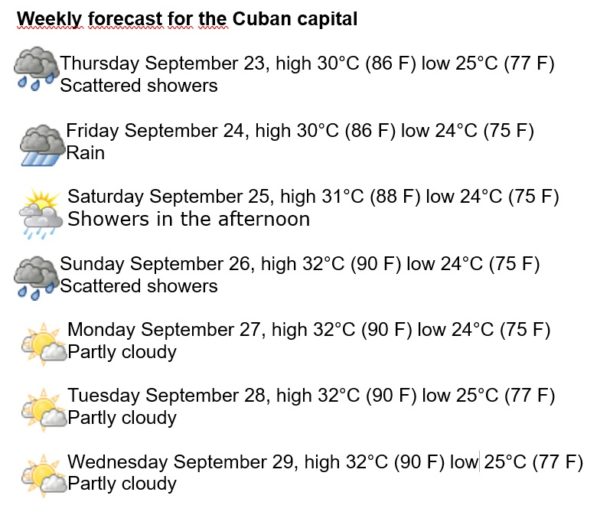