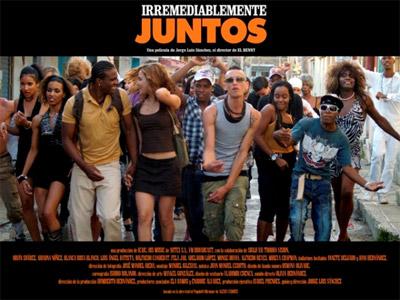 HAVANA TIMES — With the title Irremediablemente juntos (Hopelessly Together), theaters around Havana are showing the latest film by Jorge Luis Sanchez, who previously gave us his hit film El Benny and much earlier directed several important documentaries for the history of Cuban cinema.

Based on Alexis Vazquez’s musical comedy for theater, Pogolotti-Miramar, Sanchez transformed the script into a drama (as he described on a recent television appearance) using the elements he liked while rejecting others that he didn’t – though all with Vazquez’s approval.

One thing he respected was the character of a musical presented in the work, which turns the film into a musical drama, a genre hardly explored in our country.

The protagonists: Alexander is a black man studying for a degree in physical education. He comes from a musical family and lives in the marginal Pogoloti neighborhood. Liz is a white university student from a well-off family that lives in the upscale Miramar community.

From the beginning, the director puts the issue on the table. When a history teacher recalls the slaughter of members of the Independent Party of Color in the early 1900s, the protagonists are challenged:

Alexander (at the sports school) says, “Everybody in my classroom is black, except for one girl.”

Liz (at the university) comments, “Everybody in my class is white, except for one guy.”

The film also criticizes class divisions. Each of them has a partner who supports them financially. Liz has a white boyfriend who works for an important company and who is desperate to get out of the tenement where he lives.

Similarly, Alexander has a black girlfriend who is a few years older than him, holds a high-level position in a hotel and wants to have children at all costs.

Other issues raised are those dealing with corruption, double standards and the stigma of marginality. But the approach to these issues is done in a sketchy manner, without an analysis of the problems or their impact on Cuban society.

The film plays with stereotypes. It uses them to emphasize that racism isn’t something of the past, as is said with irony by an official of the Ministry of Culture (Liz’s father) to a musician (Alexander’s father). Later, when the issue hits close to home, he rejects the black man.

But one has to be careful when playing with stereotypes, careful not to get caught up in them, because it’s difficult to get out of the tangle. Even here, the black man is shown as having to be a musician or an athlete, and the black woman with an important job has to act like she’s white in order to be successful.

In the film, success means having money and a good position; to succeed, people (of any race) go to babalawos (Afro-Cuban priests), and the black woman performs well in bed and leaves the white man enraptured. These are some dangerous topics that might confuse the viewer.

I know the intention was to make a stealthy critique of the racism that infects most Cubans, protected since 1959 in more subtle though equally damaging ways.

Nonetheless, if we consider that the actors are beautiful (a sweet and pretty white woman and a graceful, muscular black man), leaving out all those who don’t meet those standards, the film in itself becomes discriminatory.

I think the idea of the musical pales the true intention. It’s not that I’m against this genre, but it needed a more modern touch, such as in Dancing in the Dark.

In any case, among the audience were protests every time one of the actors began to sing, but people still identified with the film, though not so much with the drama that arose.

This is why on Sunday at the Yara Cinema, there was applause when Liz confronted her family and shouted that her boyfriend was black and laughter at the reaction of her family. Audience joy came when Liz’s ex-boyfriend gets married (before leaving to the United States) to a black neighbor who according to people, “qualified for the trip.”

4 thoughts on “Hopelessly Together, a New Cuban Film”