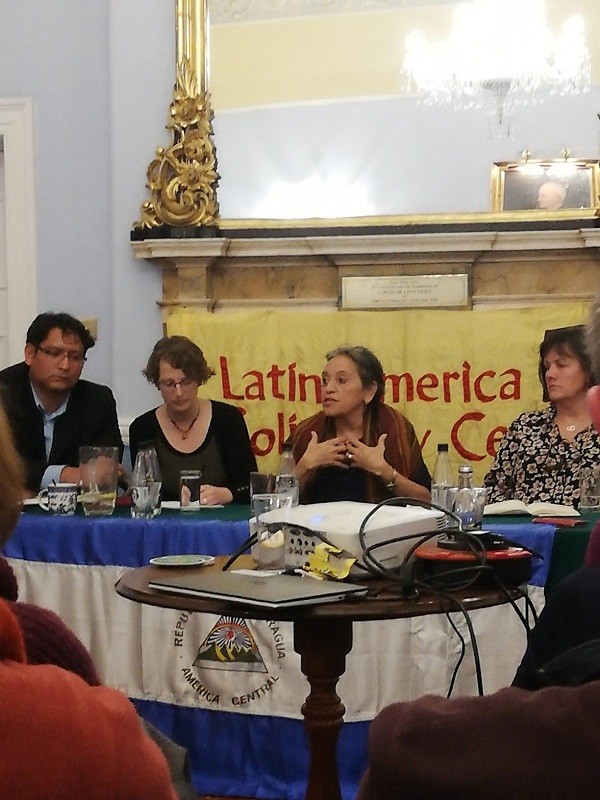 HAVANA TIMES – A public meeting took place in Dublin, Ireland, on March 10th under the auspices of LASC (Latin America Solidarity Centre) with two members of the Human Rights Collective Nicaragua Nunca Mas*. There were about 50 people in attendance.

Juan Carlos Arce, human rights lawyer who works mainly with campesinos suffering repression, and Marta Maria Blandon, long standing feminist and defender of women’s rights, spoke of continuing human rights violations in Nicaragua, giving as examples the attack on journalists at Ernesto Cardenal’s funeral mass last week and the police siege of a Women’s Day activity in Managua. They expressed a fear that violence would increase in 2020 and 2021 as the November 2021 elections come closer.

The two speakers stressed that the human rights situation in Nicaragua remains critical, despite Government claims that the country has ‘normalized’ since the repression of protests that began after the unpopular Social Security reforms announced in April 2018.

Government and para-military forces continue to terrorize the population. At least 325 deaths have been recorded since 2018, along with over 2,000 serious injuries and hundreds of people imprisoned and illegally detained.  More than 80,000 have fled into exile, mostly to Costa Rica. A small number are seeking asylum in Ireland.

Systematic harassment of political prisoners continues even after their release and they are also prevented from taking up employment. State forces and their paramilitary allies are immune from prosecution for previous abuses under an amnesty declared last June 2019.

A letter was read to the meeting in which the President of Ireland, Michael D Higgins, who had accompanied Daniel Ortega on his tour of Ireland in 1988, expressed support for LASC’s denunciation of the repression and his “profound belief in the spirit of the people as they battle courageously to reconstruct a truly democratic society which respects the voices of all its citizens”.

There was some hostile questioning from the floor by supporters of the Ortega-Murillo government, but most of the audience expressed appreciation to the speakers for outlining the massive deterioration of human rights in Nicaragua and to LASC for organising the event.
—–

*Nicaragua Nunca Mas was set up in Costa Rica by members of the widely respected Nicaraguan Centre for Human Rights (CENIDH) after it was forcefully closed down in December 2018. They continue its work of collecting thousands of testimonies of the atrocities, including arrests, assassinations, harassment etc.  The two speakers are in Europe to present testimonies of victims, including 56 specific cases of torture, to the United Nations Council on Human Rights in Geneva .