At Major March in Madrid 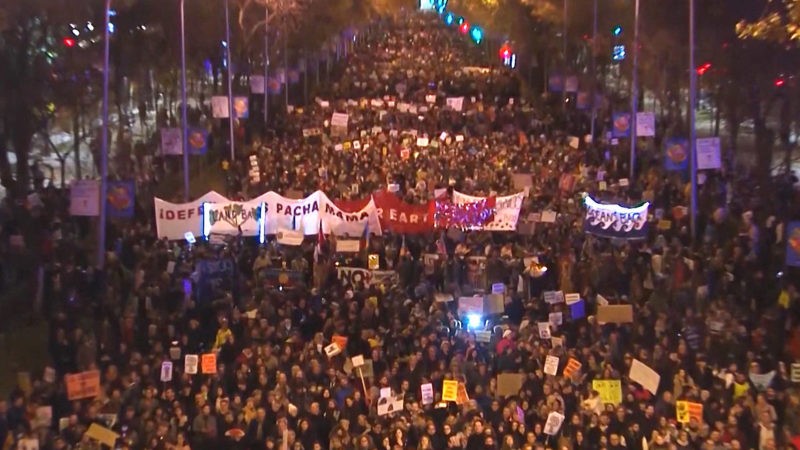 HAVANA TIMES – We broadcast from Madrid, Spain, where the 25th United Nations climate conference is in its second week and representatives from almost 200 countries have gathered for the final days of negotiations.

The summit — known as COP25, or conference of parties — has so far focused on meeting the 2015 Paris Agreement to limit global temperature rise to “well below 2 degrees Celsius,” or 3.6 degrees Fahrenheit. But climate scientists say the talks are failing to produce the drastic measures necessary to address the climate crisis.

Since the Paris Agreement four years ago, greenhouse gas emissions have risen by 4%, and this year’s summit shows no sign of arresting that trend.

On Friday, as hundreds of thousands prepared to take to the streets of Madrid in protest, Swedish climate activist Greta Thunberg told reporters that the global climate strikes have “not translated into action” by governments. Protesters then marched through Madrid’s city center Friday night in a massive climate demonstration led by indigenous leaders and youth activists. Democracy Now! was there in the streets.

AMY GOODMAN: We’re broadcasting from inside the United Nations Climate Change Conference here in Madrid, Spain, where representatives from almost 200 countries have gathered for the final days of negotiations. The climate summit, known as COP25 for “conference of parties,” has so far focused on meeting the 2015 Paris Agreement to limit global temperature rise to well below 2 degrees Celsius — that’s 3.6 degrees Fahrenheit. But climate scientists say the talks are failing to take the drastic measures necessary to address the climate crisis. Since the Paris Agreement four years ago, greenhouse gas emissions have risen by 4%, and this year’s summit shows no sign of arresting that trend. On Friday, as hundreds of thousands prepared to take to the streets of Madrid in protest, 16-year-old Swedish climate activist Greta Thunberg addressed reporters.

GRETA THUNBERG: We have been striking now for over a year, and still basically nothing has happened. The climate crisis is still being ignored by those in power. And we cannot go on like this. It is not a sustainable solution that children skip school. We cannot go on like that. So, we don’t want to continue, so we would love some action from the people in power, I mean, because people are suffering and dying from the climate and ecological emergency today, and we cannot wait any longer.

AMY GOODMAN: Protesters then marched through Madrid’s city center Friday night in a massive climate demonstration led by indigenous leaders and youth activists. Democracy Now! was there in the streets.

VIDYA DINKER: My name is Vidya. I’m from India, the south of India, a coastal community. Coastal communities across Asia are now, you know, getting that bad end of the stick because of the climate emergency. We are here to speak for our people. We know that our governments and everybody in the U.N. is now being controlled by lobbyists with oil companies and fossil fuel companies. This cannot be. We need to cut through, and we need to see that the voice of the people is heard here. There must be a loss and damage fund so that people can cope with climate emergencies.

PROTESTERS: What do we want? Climate justice! When do we want it? Now!

TA’KAIYA BLANEY: My name is Ta’Kaiya Blaney. I’m from the Tla’amin Nation, which is located in lands illegally occupied by Canada. And I’m here because indigenous youth are on the forefront of climate change. And the climate solutions being proposed by our government are a continuation of indigenous genocide. In the Wet’suwet’en territory, we have Coastal Gaslink invading those homelands and forcibly removing indigenous people from their ancestral territories for LNG, which is, according to these governments, a climate solution because it’s a transition from coal. So we’re here to say that, like, climate solutions and the fight for climate change has to be a fight for indigenous peoples, and it has to be a fight for indigenous rights, because, as indigenous youth, we don’t have a choice to act. This is about our survival.

JUAN PABLO ORREGO: I’m Juan Pablo Orrego from Chile. And we are marching for fighting climate change and also for, you know, the stop of the repression in Chile, where people are getting hurt. And we are walking for deep changes in our economic systems so we stop hurting the environment and harming people. Chile is a country that is extremely vulnerable to climate change for geographical reasons. You know, we have the driest desert in the world, in the north. So we are being affected severely. We have a desertification process happening in three-quarters of the country. It’s very severe. The river that feeds water to Santiago de Chile has lost 50% of its flow in the last decade. That’s how serious this is. And, you know, this is the 25th conference, and nothing has changed. They have been talking for 25 years, a quarter of a century, and nothing has changed, really, in the ground, and carbon dioxide keeps rising in the atmosphere. So, when are we going to really act — you know, the governments — to change things in the ground? If you go to the COP, the official COP, you’re going to see that all the companies that are guilty for the situation we are in today are sponsoring the COP. So it’s a very powerful greenwashing.

ALETHEA PHILLIPS: [speaking Omaha-Ponca] Hello. My name is Alethea Phillips. I’m from the Omaha Tribe of Nebraska. I’m here with SustainUS’ first-ever all-indigenous youth delegation to attend the U.N. climate negotiations. It’s really powerful for all these indigenous people to be coming here to Spain, somewhere that was — that has impacted us so heavily by colonization and the continuation of colonization in the climate crisis. For us, a lot of people at COP, these countries, they have never learned how to live sustainably. They’ve always been based upon a system that takes and needs more and more, whereas indigenous people, like, our traditions have always been sustainable, and because of colonization, that’s been taken away from us. So, for us to be here, it’s not so much that we’re trying to learn how to live sustainably. We’ve always been protectors of the land. We’ve always worked with nature, not against it. So, going forward, it’s really important that we really look to indigenous people as leaders of the climate movement, and not just victims.