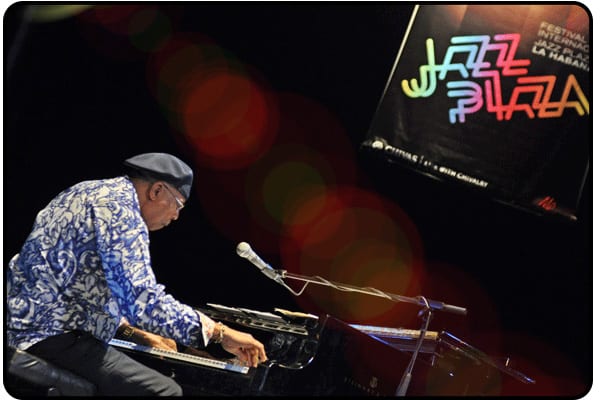 HAVANA TIMES — Since its creation back in 1979, the Jazz Plaza festival has been a space for the promotion and coming together of artists. Many are the renowned jazz musicians who have taken part in concerts, jam sessions or conferences offered at the festival. The list is truly immense, including artists such as Dizzy Gillespie, Charlie Haden, Ronnie Scott, Max Roach, Giovanni Hidalgo, Arturo O’Farril and a plethora of Cuban artists residing on the island and abroad.

Everything is ready for the 31st International Jazz Plaza Festival, to be held from December 17 to 20, dedicated to the music genres that have an impact on jazz music. The festival will lay special emphasis on the music traditions of African, Latin American and Caribbean countries.

Starting on Wednesday, October 16 and throughout the month, the Pabellon Cuba will open its doors to FERIAJAZZ. There, in addition to visual art exhibitions, the younger jazz musicians will offer jam sessions and renowned musicians will treat us to concerts, lectures and colloquia.

Several venues will welcome Cuban soloists and bands, as well as those visiting us from other corners of the world.

This year’s Jazz Plaza special guests will include the rock band ZZTOP, led by singer and guitarist Billy Gibbons, Cuban drummer Fidel Morales (now living in Puerto Rico), Chilean Daniel Puente Encina, known for his numerous music projects (including the anti-fascist band Pinochet Boys, Niños con Bombas y Polvorosa), US saxophonist Kenny G and Miguel de Armas, a Cuban artist coming from Canada with his Latin jazz quartet. We will also be seeing The Preservation Hall Jazz Band, from the United States, which, along with pianist Hernan Lopez-Nussa, will open the festival at Havana’s Teatro Mella. At this theater, we will also be treated to pure Latin jazz performances by bands from Argentina, Spain, Cuba, the United States and others.

Fans of ZZTOP will be able to see the band play at the Maxim Rock and La Fabrica de Arte Cubano.

As has become customary, the renowned Casa de Cultura at the intersection of Calzada and 8th streets will not be left out of the loop and will be joined by the concert hall of the Tito Junco theater.

The closing gala will feature renowned pianist Chucho Valdes and guest musicians. This year’s festival will also be characterized by music diversity, with a night devoted to electronic music.

As the New Year approaches, you too will be able to enjoy a bit of Cuban jazz…and more.

One thought on “Jazz…and More at Havana Festival”