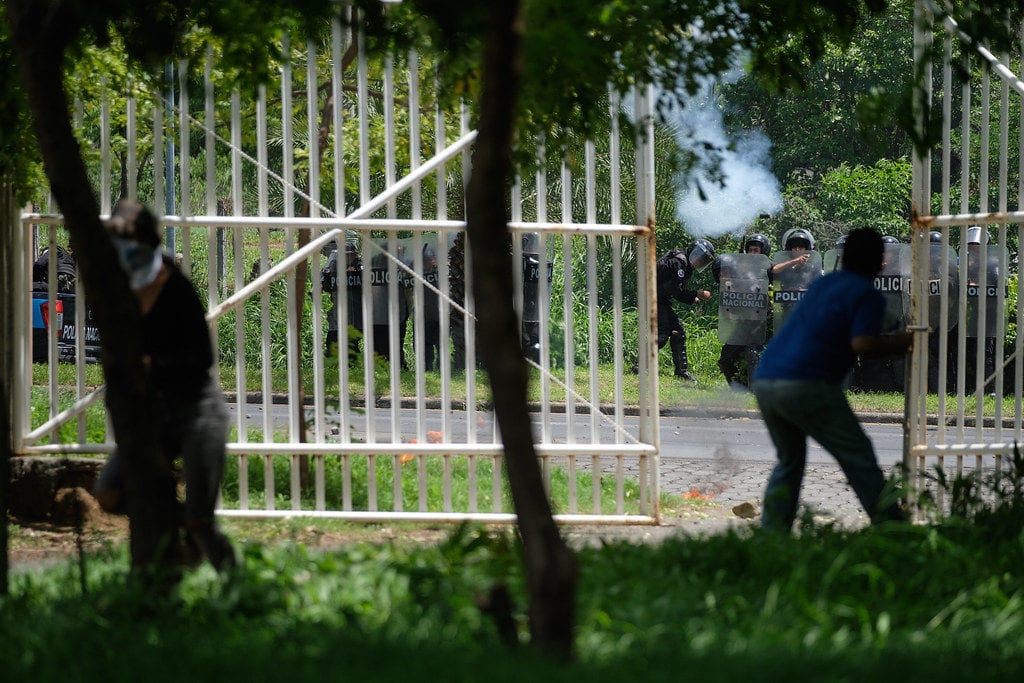 The officers fired stun bombs as soon as the demonstrators approached the gates around the church.

HAVANA TIMES – A mass to offer thanks for the release of a large group of political prisoners ended in a confrontation between the National Police and about a hundred citizens attempting to stage a protest outside the Managua cathedral.

At the end of the mass the demonstrators approached one of the gates around the Cathedral, but Daniel Ortega’s riot squad agents had surrounded the perimeter and fired stun bombs to drive them back. The demonstrators responded with stones and mortars.

A youth was wounded slightly in the confrontation, although he was quickly attended to by the people inside the church. The demonstrators remained at the scene for a few hours and later left in small groups, despite the police cordon.

Jerry Estrada of the Blue and White Unity movement explained: “We wanted to go out to the highway to demonstrate, to make use of our freedom of expression, but it wasn’t possible. Once again, the police repressed the population, when our only intention was to lift our voices to demand justice, freedom and all of our rights as the human beings that we are, rights that are in the Constitution and are also universal rights,” he said.

In the same way, former political prisoner Levis Artola lamented the fact that the population maintained an apparent calm, despite the abuses of power in Nicaragua.

“We should all have a commitment. If we all went out on the street, if we all spoke out, it would be a different story here … For them to do this (repression) is normal, because they do what they do; but we also give what we have, and that’s to stand firm in the face of every manifestation of violence, against corruption, and to stand firm against the regime to achieve a free Nicaragua.” Artola emphasized.

Previous to the confrontation with the police, those present at the mass shouted slogans in the atrium of the Managua cathedral, waved their national flags and took selfies with the newly released political prisoners who had come from several parts of the country to thank God for their liberation.

During the liturgical celebration, Friar Silvio Romero, Vicar of the Cathedral, denounced the presence of police in the interior of the church. These officials had entered in civilian clothes with the objective of photographing and identifying those in attendance at the mass.

“We ask you to let the faithful in. How good it is that religious freedom, freedom of worship, and freedom of conscience are all in our Constitution.  We also invite the police that are here inside in civilian clothes that they not take photographs of those who come, that they not take videos of the people who come. We know that the Police aren’t only outside, they’re also inside. So, to those who are inside, don’t take videos of the people who come to mass. They’re simply coming to the service, and it’s not a crime,” said the religious leader.

This repressive action in the Managua cathedral occurred a day after a mob of fanatical followers of Daniel Ortega and Rosario Murillo attacked Catholic parishioners and former political prisoners in Leon with stones, glass bottles and sticks, while the latter were participating in a mass to mark the first anniversary of the assassination of Sandor Dolmus, formerly an altar boy in this Catholic temple.