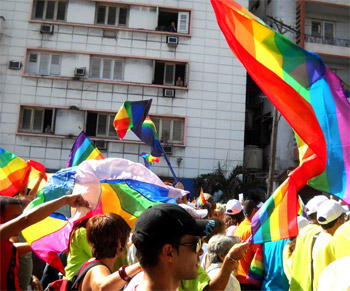 HAVANA TIMES —  Director of Cuba’s National Center for Sexual Education (CENESEX) Mariela Castro said on Tuesday that the space where homosexuals and transsexuals face the most severe forms of discrimination in Cuba continues to be their own home, DPA reported.

Attorneys working at CENESEX’s legal department, which offers the public counseling on issues related to sexual rights, identified the family and workplace as the most vulnerable spaces in terms of discrimination on the basis of sexual orientation.

Cuba’s 5th annual Campaign Against Homophobia (which takes place each May), focuses on the issue of discrimination within the family. It will be held under the slogan of “Home Means Love, Respect and Inclusion – For a Family Free of Homophobia and Transphobia.”

From now until May 31st, symposia, workshops, art exhibitions and debates on the issue of sexual rights, inequality and social integration will be he held in Havana and the central Cuban city of Ciego de Avila as part of the event.

For years, Mariela Castro, daughter of Cuban President Raul Castro and the island’s most renowned gay rights activist, has been calling for a parliamentary debate aimed at changing the country’s Family Code and legalizing same-sex marriages.

“Laws, in and of themselves, do not guarantee respect towards human rights. You need the support of a government with the political will to change things to transform social awareness,” Mariela Castro declared during a press conference.

As the called-for reforms have given rise to controversy in Cuban society, particularly within the Communist Party and Catholic Church, Mariela Castro feels that “it would not enough to legalize these practices, these rights must be legitimated.”

One of the CENESEX’s chief priorities is its work with young people. Thanks to the institution, Cuban universities have opened more and more spaces where these issues can be debated, something “which has not been easy, because we’ve also come across a lot of resistance,” the activist explained.

Last year, to standardize and systematize its work in this area, the CENESEX entered into an agreement with the Cuban Ministry of Higher Education, which established a program of activities for the country’s university campuses.

Mariela Castro’s commitment to the struggle for gay rights has been acknowledged around the world. This week, she was honored with the International Ally for LGBT Equality Award, granted by the US organization Equality Forum.