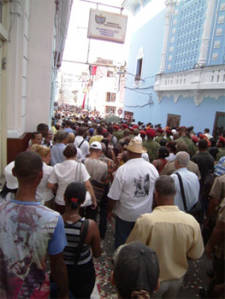 HAVANA TIMES — Only days after the festivities and nights of partying ended from the famous Santiago de Cuba carnival (July 21-29) the city dressed for a funeral to honor its fallen martyrs. July 30th marked the 55th anniversary of the 1957 murder on order of the young urban rebel leaders Frank Pais and Raul Pujol Arencibia at the hands of hired hands of the dictator Fulgencio Batista.

In 1959 the date was baptized as National Martyrs Day and the funeral procession is reenacted each year in Santiago from the house where the wake took place to the Santa Ifigenia cemetery where they were buried.