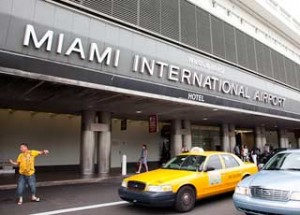 HAVANA TIMES – Miami International Airport (MIA) has become a haven for thousands of Cuban-born travellers who request asylum in the United States on a daily basis after landing on US soil and approaching an immigration officer.

According to figures made available to CafeFuerte by the US Customs and Border Protection Department (CBP), the number of Cubans arriving at the MIA with a family or immigrant visas had gone up to 56,410 as of the end of June. Of this total, some 9,700 are individuals holding a Spanish or other European passport who invoke the Cuban Adjustment Act (CAA) once inside the United States.

This could well be a conservative estimate, as calculations were made on the assumption that the vast majority of the 29,700 travellers who benefitted from a B1 or B2 visa or the more than 17,000 who received the documentation needed to emigrate legally until the third quarter of the 2014 fiscal year entered the United States through the MIA.

What’s certain is that a wave of “aerial refugees” is knocking on Miami’s doors, in addition to the thousands who arrive in the country after crossing the Mexican or Canadian borders or the “dry-footers” who manage to reach Florida’s coasts after maritime journeys.

“Every day, I get calls or news about Cubans who arrive at the Miami International Airport with a Spanish or Italian Passport and request political asylum,” immigration lawyer Willy Allen stated. “It’s a common phenomenon these days, because the authorities are processing Cubans with greater flexibility now.”

The phenomenon has become extremely common in the last three years because of the growing numbers of Cubans with Spanish nationality who request asylum under CAA provisions upon arrival at the Miami airport. People with passports from Spain or other EU member countries don’t require a visa to enter the United States, only a document or waiver secured through the Electronic System for Travel Authorization (ESTA), which came into effect in January of 2009.

More than 180,000 Cubans have become Spanish citizens under the Historic Memory Law (also known as the Grandchildren Law), which came into effect in December of 2008. Owing to Spain’s economic crisis and many people’s inability to pay for a ticket to Spain, many of so-called cubañoles (“Cuban-Spaniards”) have used their newly-acquired citizenship to travel and settle in the United States, skirting the visa requirements for Cubans.

Some travel to the United States from Spain, but a considerably large number of immigrants does so from the Bahamas, the Cayman Islands or a country in Central America. Direct flights to Miami from Havana are reserved only for those who travel with a Cuban passport or US citizens who have been specifically authorized to do so.

The Benefits to Refugees

Cuban-Spaniards can enter the United States, reside in the country for a year and then request a change in status under CAA provisions, but requesting political asylum has the added incentive of economic aid and medical benefits during the first months of adaptation to the country.

“It’s become routine. People arrive and very calmly tell you they want to invoke the Cuban Adjustment Act. The procedure is almost automatic,” said the immigration supervisor who agreed to offer statements to CafeFuerte, on condition that he remain anonymous.
Nevertheless, the source indicated that the granting of political asylum “is at the discretion of the immigration official.”

“I believe immigration isn’t being strict in Miami,” Allen affirmed. “I’ve seen cases of people who have tried to enter the country this way through other airports who have been detained or deported back to Spain.”

The figures on the entry of Cubans into the United States offered by the CBP authorities cover 121 border points, immigration stations and airports during the present fiscal year. The most porous area is the Mexican border, which has already registered the record figure of 14,000 Cuban refugees. The number of Cubans requesting asylum after arriving at airports has, however, also increased significantly.

The situation is beginning to worry officials, faced with a seemingly unstoppable exodus of Cubans towards the United States – including a considerable increase in the number of rafters during the summer.

11 thoughts on “Miami Airport: The New Haven for Cuban Migrants”