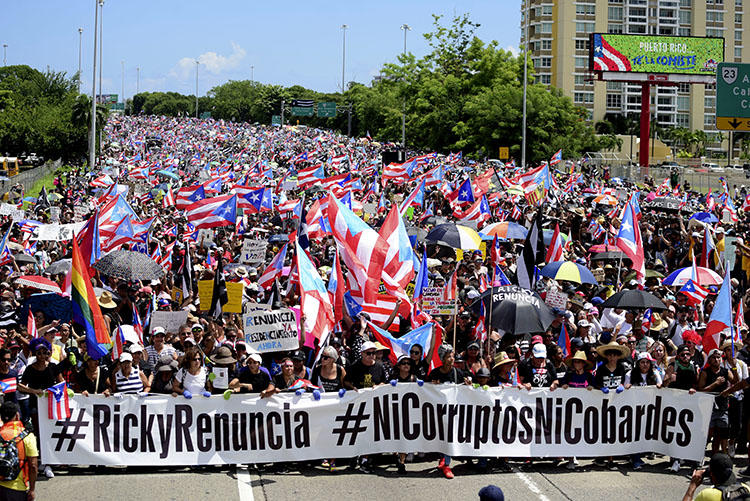 HAVANA TIMES – In July 2019, anti-government protesters gathered on the streets of Puerto Rico, motivated in part by the work of investigative journalists who had obtained and published over 900 messages exchanged by then Governor Ricardo Rosselló and his allies that disparaged political opponents and the island’s citizens. Before Rosselló gave in to public pressure to resign in early August, he quietly signed a pair of laws that severely limit access to public information in Puerto Rico, local journalists and press freedom advocates told the Committee to Protect Journalists.

The new laws —the Open Data Law (122) and the Transparency Law (141)—, increase the number of business days agencies can delay submitting requested information or documents, and do not provide precise definitions of the term “public document,” according to a CPJ review. They also require all information requests to be sent via mail or email, prohibiting requests over the phone or in person.

Journalists told CPJ that the laws make it harder for them to obtain public documents, speak with government officials, and trust the available data.

CPJ’s review of the laws also found that they contain broad wording that gives government officials much leeway to refuse information requests. For example, the Transparency Law states that the government can restrict access to data if an official decides, “it furthers an important or substantial governmental interest” or “the governmental interest is unrelated to the suppression of free expression.” In addition, the $250 fine against government employees who obstruct access was eliminated under the new laws.

“In an act of total contempt towards the country, during the twilight hours, Ricardo Rosselló signed the Law of Transparency, which was his last act as governor. The legislators who approved those projects, also in dark rooms and knowing what it means to limit citizen law, are as responsible for that legacy as the governor,” said Cecille Blondet, executive director of local transparency group Open Spaces (Espacios Abiertos), in a press release.

Sandra Rodriguez Cotto, a freelance investigative journalist, was blunter, telling CPJ, “What Rosselló did was very dangerous and an act of vengeance.”

CPJ reached out to Rosselló for comment via his legal adviser, Roxanna I. Soto Aguilu; a former member of his cabinet, Ricardo Llerandi; his wife, Beatriz Rosselló; and the press officer of his successor as governor, Wanda Vazquez Garced, but did not receive a reply through any of those channels.

Both the Open Data Law and the Transparency Law went through the legislature without public hearings, Blondet said. Then Rosselló signed them against the recommendations of journalists and transparency groups, such as the Association of Journalists of Puerto Rico, the Overseas Press Club, the Association of Photojournalists, the Center for Investigative Journalism (CPI), and Open Spaces.

As the island faces a bankruptcy crisis and austerity measures imposed by the federal Financial Oversight and Management Board, known as the Oversight Board, and recovers from a magnitude 6.4 earthquake in early January, journalists in Puerto Rico said the new laws add to the challenges they already faced holding the government to account.

“These laws undermine journalistic practice whenever the government relies on these statutes to deny documents that are ordinarily of public interest,” said Victor Luis Rodriguez, a fellow for the national Report for America program in Puerto Rico. Rodriguez has spent over 10 years requesting information at the local and federal levels. However, he has not received any responses to his information requests since September 2019.

The laws passed even though in 1982, the Supreme Court of Puerto Rico recognized access to public information as a constitutional right in Soto v. Secretario de Justicia. Since then, the legislative and executive branches have proposed more than a dozen measures trying to limit or enhance access, according to a review by CPJ, but none passed until the 2019 laws signed by Rosselló.

In addition, the New Progressive Party and Popular Democratic Party—which have governed in four or eight-year terms since 1968—have long dragged their feet when it comes to complying with information requests, Puerto Rican journalists told CPJ.

“Both parties have done the most they could to limit access,” Carla Minet, CPI’s executive director, told CPJ. Her team knows first-hand why access to public information is crucial. Their investigative work in 2017 uncovered evidence that the death toll of Hurricanes Maria and Irma was much higher than the government claimed. The report was published after years of requesting documents that uncovered the government’s inefficient response to emergencies.

Another report by CPI, the Climate Change Series Project—which was the culmination of years of requesting documents—found that despite Puerto Rico’s vulnerability, the government had taken limited measures to prepare.

CPI has consistently used the U.S. federal Freedom of Information Act (FOIA) to gain information about the recovery efforts after natural disasters, monitor the government debt, and to watch the Fiscal Control Board. However, obtaining this information has been a struggle, Minet says, because the U.S. federal government “barely responds to us.” The new laws could make things worse: they contain 12 new exemptions for the release of information, more than the FOIA itself.

Rodriguez, the Report for America fellow, told CPJ that the government is increasingly shutting off other avenues for journalistic inquiry. “One practice that has become common in Puerto Rico is convening a news conference in which it is prohibited to pose questions about other topics.”

Small regional media outlets, which are already struggling due to a lack of economic resources, could be in further peril under the new laws. Jose Maldonado, editor of digital media outlet EyBoricua, told CPJ, “It’s common to solicit information from the government agencies and officers about diverse topics and have that request ignored since we are not a massive media network,” he said.

Governor Vázquez, who assumed the post after Rosselló’s resignation, held a meeting with journalists and discussed issues related to the two laws on November 22, 2019. When CPJ requested an interview, her office declined but shared a link to an article about that meeting. In the piece, Damaris Suárez, the president of the Puerto Rican Journalists Association, is quoted as saying: “It was a good meeting. The governor is open to recommendations.”

Suárez told CPJ, “These laws must be repealed, they are not amendable,” adding, “I am willing to give recommendations to see if something improves because she [the governor] said that revoking them was hard, but there are some things we are not willing to negotiate.”

If officials do not comply with information requests, journalists and citizens often seek a judicial remedy at a District Court. Previously, only judges with expertise in access to information would handle these cases, Oscar J. Serrano, a lawyer, chief editor of news website Noticel, and CPI cofounder, told CPJ. Under the Transparency Law, Serrano said, judges are randomly selected to hear these cases.

“The claimant may miss the expertise that the experienced judges have developed in this matter,” he added.

In another worrisome provision, the Open Data Law states that the Institute of Statistics (IEPR)—the only government agency traditionally free of political interference—is required to disclose on its website the list of data available from government agencies. However, the IEPR’s data analysts and statisticians have no power to analyze the data; rather, they are required to simply publish it via the agency’s internet portal. Because other government agencies are heavily influenced by partisan politics, this practice will increase distrust in the available public data, GFR Media journalist Ricardo Cortés Chico told CPJ.

However, the law exempts the legislative and judicial branches and municipal governments; they are simply required to digitize information, such as budgets and expenditures, strategic plans and outcomes, and external financial audits before August 2020.

“This is a very worrisome law,” said Istra Pacheco, a reporter with the Puerto Rican publication Metro, referring to the Open Data Law. “The real effect is contrary to what is proclaimed in its name… its real intention is to put layers upon layers of red tape in the bureaucracy; to make everything more tedious and provoke a disinterest in pursuing the information in a bankrupt country.”
—–

*Coral Negrón, CPJ’s Patti Birch Fellow for Data Journalism, covered the aftermath of Hurricane Maria in Puerto Rico for Univision Noticias and was a data reporter for the news sites La Isla Oeste and La Perla del Sur. A data journalist with experience in hyperlocal reporting, data analysis, coding, and information design, she graduated from the University of Puerto Rico and Columbia Journalism School’s Lede 24 Program.