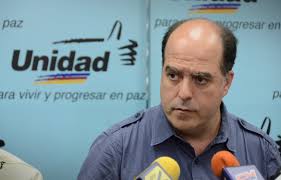 HAVANA TIMES — Julio Borges became the new president of the Venezuelan National Assembly on Thursday, controlled by opposition legislators, and he accused Nicolas Maduro’s “dictatorship” of having “stolen” the Venezuelan people’s right to vote.

At the opening of the 2017 legislative year, Borges, 47, not only responded to the government’s threats about not recognizing the legislative body’s powers, but also proposed that the country search for a way to hold elections in 2017 for all positions, including that of president and the legislature.

“I’m sending a clear message to Mr. Nicolas Maduro from here: The Venezuelan people are the owners of democracy, they have a right to vote and to decide their future. Mr. Nicolas Maduro don’t continue to hold onto the people’s sovereignty because you’ll end up being swept away, like somebody who comes across a swollen river.

He announced that in the coming weeks the majority of the legislature will approve a Declaration of Abandonment for the presidential position which Maduro holds, as “abandoning the Constitution means abandoning his position.”

Borges, from the center-right political party Justice First, is replacing the social democrat Henry Ramos Allup as president of the National Assembly, and will be accompanied by Fredy Guevara, from the Popular Will party of the imprisoned leader Leopoldo Lopez, as the First Vice-President.

The majority of the opposition bench, which was headed by Borges in 2016, will now have Stalin Gonzalez as their leader, who comes from the student movement which has confronted the government since 2007.

The government’s bench rejected the election of the new executive committee, stating that it was an “illegal” act, as the Assembly continues to be in contempt of the Maduro government controlled Supreme Court of Justice (TSJ) for not having formalized the withdrawal of three legislators in question since their election in December 2015.

The bench’s leader, Hector Rodriguez, criticized Ramos Allup’s management as the head of the Assembly, who he accused of trying to overthrow the government. He harshly criticized the legislature’s numerous failed attempts to remove Maduro from power in 2016.

On Wednesday, Maduro insisted on the contempt premise and stated that this Assembly, which is “useless to the country”, is on its “way to self-dissolution.”

Borges was sworn into his position and said that the Assembly would take the side of the “suffering and abused” Venezuelan people in search of political change which “will allow us to build a future.”

Borges began his speech asking for a round of applause for Ramos, who proposed ways to advance the end of the Maduro government last year without success, including a recall referendum which was cancelled.

“We are living in unjust and shameful times. Venezuela is the richest country in the world, with the most amounts of oil, gas and human resources, but it has people looking for food in the garbage and our grandparents fainting in long lines looking for medicine and food,” he said.

He added that this situation is the fault of one man only who insists on remaining in power.

“We know who rules us very well; we know his miserable and care-free way of acting, his fear of losing power because power has become a drug that he can’t free himself from. Our struggle today is to establish peace, through a non-violent process, but with the strength of the Venezuelan people demanding elections, the Constitution and change,” he stated.

He also added that Maduro made the decision that “there would never be elections in Venezuela again and that this is unacceptable and we won’t allow it, no matter what we have to do.”

Borges sent a message to the Armed Forces calling on them to respect the constitution and decide if they want to be remembered as the “heirs of Simon Bolivar or as Nicolas Maduro’s guards.”