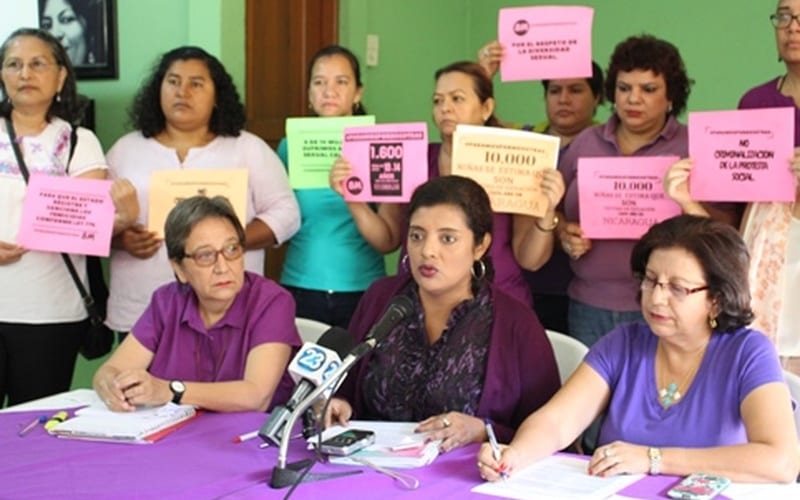 HAVANA TIMES – The idea for an International Women’s Strike (#NosotrasParamos) arose in Poland in 2016, when women there held a one-day strike to protest an initiative to eliminate abortion rights.

In Nicaragua, the 2017 International Women’s Strike will become a reality because “they continue killing us, they continue forcing girls who have been raped to give birth, they persist in enacting policies that don’t recognize us as subjects with rights, and we don’t earn the same as men who do the same work,” explained Fatima Millon of the Isnin Women’s Center.

Millon spoke on Thursday at a press conference where members of the Nicaragua’s Women’s Movement announced that they would be joining the International Work Stoppage on March 8.

Juana Jiménez of the Autonomous Women’s Movement (MAM) added that they would be joining the strike to push for access to justice for women, and the reopening of the special police Commissions for Women and Children, because in a 10-year period there have been 725 femicides registered in the country, and still the authorities resist recognizing them and sanctioning the perpetrators.

She shared the fact that ten thousand girls continue to be victims of sex abuse each year and eight of every ten women are victims of daily harassment on the street, added to the criminalization of the advocates’ work in the communities. “There’s been a dismantling of the territorial autonomy to recover the right of women to full citizen participation.  We’re striking to reestablish the autonomy of the Caribbean Coast and for the repeal of Law 840 (canal law) that has sold off our national sovereignty and affects thousands of women in their territory.”

Mirna Blandón of the Feminist Movement added: “We’re striking so that girls and adolescents don’t have an unwanted pregnancy imposed on them and a maternity that cuts short their life and their development; for decent jobs for women; for access to social security and a quality education; to assure just access to land tenancy for rural women.  We also want to bring to light the tactics used in the free-trade zones, that when they increase salaries also increase the production norms.

Actions in the territories

During the conference it was announced that actions would be held simultaneously held in different territories including a march in Managua, forming a human chain. Juana Jiménez explained that such a chain would symbolize the force, unity, solidarity and resistance of Nicaraguan feminism while facing up to a system that violates women’s bodies.

Activities in commemoration of March 8th (#NosotrasParamos) began on February 30th with a Forum where women’s contribution to peace was debated in the Central American University.

On March 5th more than 700 women will gather to debate the situation of the maquila factories in the free trade zones.

On March 8th itself, in the city of León, a Stoppage will be held in the central park of this city.  In Matagalpa, on this same day, there’ll be a sit-in, after visits to the communities to explain the reasons for the #8M Strike.

On March 11 the Ometepe Women’s Network will hold an activity in the municipality of Altagracia.

Afro and indigenous women of the Caribbean Coast will hold their own specific marches and mobilizations.

Upon finalizing the conference, an invitation was extended to all the women of the country to join this International Strike that will take place in 40 countries.  From their homes and workplaces, women can make a public statement: #ElPoderDeLaPalabra.