Nicaragua and Belize are the only two countries in the region that haven’t taken five of the seven sanitary measures recommended by the World Health Organization.

HAVANA TIMES – Nicaragua and Belize are the only two countries in the Central American Integration System (SICA) that have yet to fulfill the majority of the seven sanitary measures established in the international regulations approved by the World Health Organization (WHO).

Nicaragua hasn’t suspended classes in their schools and universities, nor has it decreed a quarantine for citizens and foreigners; nor have they implemented any restrictions on public activities and crowds, as the international regulation recommends.

It has also not implemented any restrictions on flights coming from other countries with confirmed cases of Coronavirus, or a total restriction of foreigners into the country, according to the document.

The report from the Central American Integration System was elaborated following several meetings between the region’s heads of state. Following the first meeting, Vice President and First Lady Rosario Murillo noted the importance of this type of meetings and of adopting recommendations for avoiding the spread of the Coronavirus.

“The importance that governments give to human security, public health, the common good of the peoples in the region, and principally to this menace, this global pandemic, also informs the peoples of the region that our national health systems are attending to the pandemic according to the protocols oriented by the WHO and the Pan American Health Organization, taking national measures through the Ministries and the Secretary of Health, including binational and cross-border collaboration between health services for the integral attention to suspected and confirmed cases of Covid-19,” Murillo assured on Thursday.

Nevertheless, far from adopting the measures recommended by the health organizations, the Ortega government has neglected them, calling for rallies and mass walks with no type of concern or measures.

“It’s criminally irresponsible. Ortega and Murillo should be charged for exposing people to danger. They’re playing with the public health of Nicaraguans and forcing the state workers to attend a high-risk activity. This could signify a huge problem for the whole country,” expressed former guerrilla leader and ex-Minister of Health Dora Maria Tellez.

The SICA report on the reginal plan, entitled “Central America United against the Coronavirus”, details that Nicaragua is one of three countries that haven’t registered any infected persons. Panama and Costa Rica are the most affected, with 36 and 26 cases.

The document also reflects that according to the type of alerts that the eight member countries in SICA have issued, Nicaragua, in theory, is on national alert. Nonetheless, the results of this measure are unknown, due to the misinformation and lack of communication of the Ortega regime. 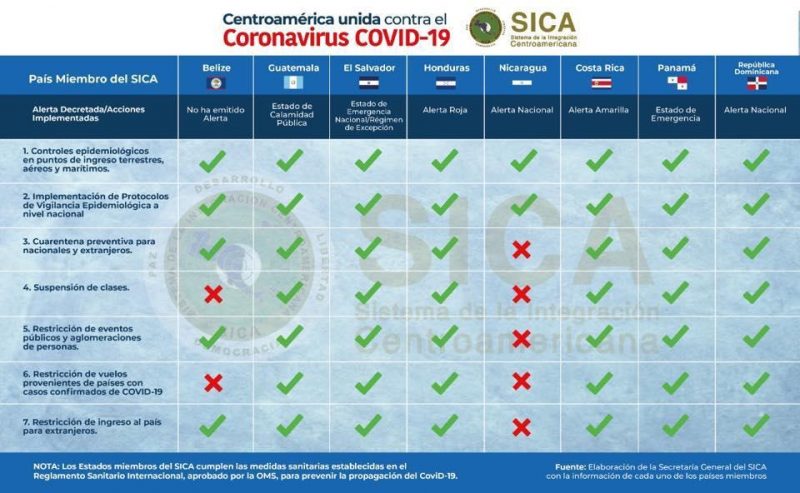