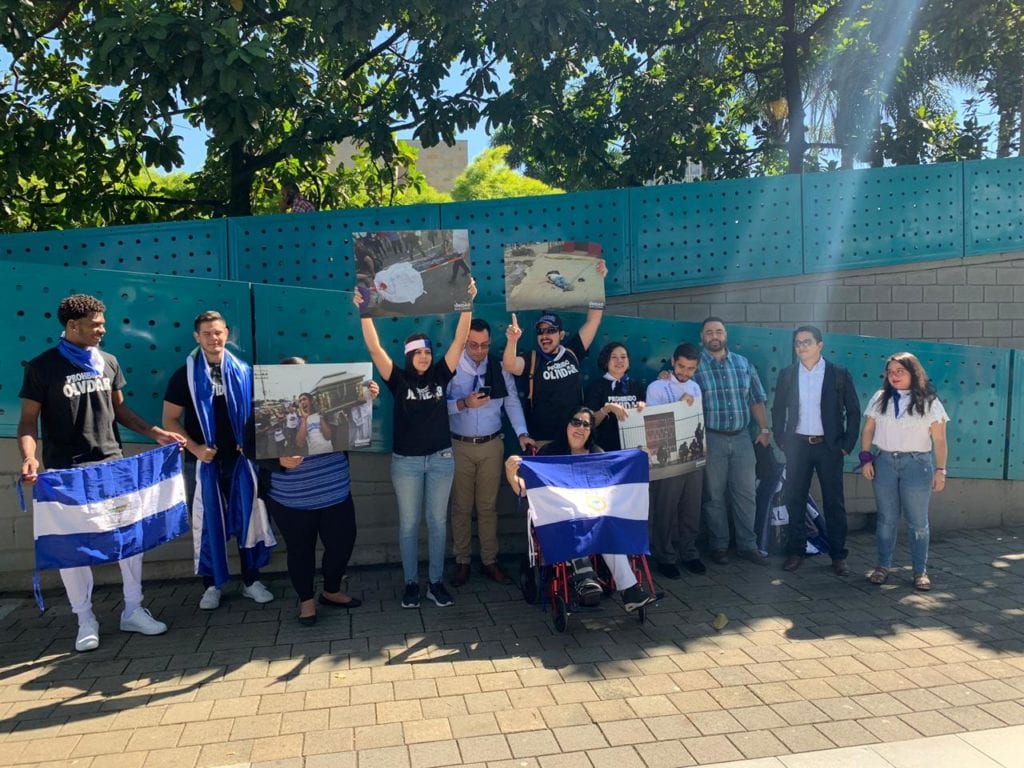 “There was already a 90-day period for the total release of innocent people, and we still do not have it. Neither have liberties been restored,” they criticize.

HAVANA TIMES – In the proposed resolution of the Working Group for Nicaragua, which will be discussed by the foreign ministers of the Organization of American States (OAS) during the General Assembly taking place in Medellin, Colombia, there is a point of disagreement with the Nicaraguan opposition. This is the deadline of three months stipulated for a proposed commission to present a report to the OAS Permanent Council on the compliance with the agreements signed by the government at the negotiating table, the same accords that Daniel Ortega has disregarded to this day.

This period is considered disproportionate by members of the Civic Alliance and the Blue and White National Unity movement, who interpret that it would grant more time and political oxygen to the regime.  Numerous Nicaraguan opponents to the Ortega regime are in Medellin for the Assembly. They began a diplomatic lobby effort on Wednesday with the promoters of the resolution to try to influence the reduction of the deadline.

“There has already been a 90-day period for the total release of innocent people, and we still do not have the total liberation…neither do we have the restoration of citizens’ rights and guarantees,” noted Azahalea Solis, a member of the Civic Alliance.

The opponents claim that the government is still holding more than 90 political prisoners in its jails, breaching the agreement signed with the Alliance at the end of March. The Ortega-Murillo government has released the majority of the 777 political prisoners through changes in prison regimes and its amnesty law, but it still has not nullified the criminal proceedings against them or stop the persecution and harassment they and their families are suffering.

“The idea is that we can influence the delegations and make them see that the deadline is too long to wait for answers from the government,” said Juan Sebastian Chamorro, also from the Civic Alliance. “We are working to explain that if there is a political will on the part of the government, which thus far we have seen very little of, it does not take 90 days for it to show any signs. It can be done in much less time.”

Lobbying with foreign ministers and delegations

OAS diplomatic sources confirmed to Confidencial that the Nicaraguan opponents have approached the delegations of “Argentina and Ecuador.” The representatives of these two countries have shown themselves “willing” to reduce the term, because they also do not “consider it adequate.”

The Nicaraguan opposition members also intend to meet with the foreign ministers who are arriving Wednesday to Medellin to explain their reasons why they should reduce the proposed term.

“We do not agree with a three-month period because it makes no sense to continue prolonging the serious situation of Nicaragua,” said Violeta Granera, of the political council of Blue and White Unity movement (UNAB). “Ortega does not comply and, on the contrary, continues to repress…and is improving his paramilitary system.”

Luis Almagro, Secretary General of the OAS, offered statements on Tuesday that caused controversy. He argued that with the release of political prisoners, Ortega “demonstrated levels of commitment to achieve a negotiated solution.” Almagro compared the Nicaraguan crisis with the Venezuelan one and assured that the Sandinista caudillo “still governs” while Nicolas Maduro “represses.”

“Mr. Almagro’s statements are also causing controversies here (in Medellin) among human rights organizations that participate in the General Assembly, because they show that he does not really understand the situation in Nicaragua,” lamented Azahalea Solis. “It seems that Almagro is in contradiction with the statement that the OAS put out several days ago, and that differentiated between being released from prison and liberated. At this point in time, 100% of the people have not been liberated (…) These are issues about which the Secretary General should measure his words in the future.”

Not enough votes to apply suspension

The proposed resolution presented by Canada, and backed by six other countries, urges that the national dialogue be resumed, insists on the re-entry into Nicaragua of the Inter-American Commission of Human Rights (IACHR), and demands that all political prisoners should be freed.

The draft proposal highlights that “serious violations of human rights, freedom of expression and the press in Nicaragua since April of 2018, and the lack of progress in electoral reforms that guarantee free, fair, transparent and legitimate elections, constitute a disruption of the democratic order in terms of the Inter-American Democratic Charter.”

However, diplomatic sources of the OAS affirm that they do not have sufficient votes to declare the alteration of the democratic order in Nicaragua, and that, on the contrary, the bet is the negotiated solution to the crisis with the government. Nonetheless, there are 18 votes in the OAS to approve this resolution, which in general terms, has the approval of the Nicaraguan opposition, with the exception of the three-month period.

“The Permanent Council has already made several collective assessments on Nicaragua,” criticized Violeta Granera. “Ortega has shown over and over again his unwillingness to agree to a negotiated solution to the crisis he has caused. So, the only thing missing and expected by the people of Nicaragua, in a short and very definite term, is to move to the application of Article 21 of the Democratic Charter,” said this member of the Political Council of the UNAB.

The General Assembly officially opened on Wednesday night, and the agenda for the event, in which is the proposed resolution is found, must be approved by the foreign ministers and then discussed.

On Wednesday, the representatives of the States listened to leaders of civil society in a meeting prior to the General Assembly. The delegates of the Ortega government did not attend this event, while the United States Ambassador, Carlos Trujillo, criticized the Sandinista regime in the session. Also on Wednesday morning, Nicaraguans and Venezuelans organized a protest against their respective dictators outside the building of the Main Square of Medellin.