After 15 months of having their paper and other materials illegally withheld by the Ortega government.

“Like the other national newspaper La Prensa, El Nuevo Diario has been subject to an arbitrary and illegal customs boycott” of the Ortega government, denounced PEN International.

HAVANA TIMES – The Nicaraguan national newspaper El Nuevo Diario announced its closure on Friday at midnight, due to “economic, technical and logistical difficulties, which made its operation unsustainable”.

Hours later, it confirmed to its journalists and other collaborators that the end of operations affects both the print and digital editions.

The news comes in the midst of the deepening crisis facing Nicaragua, characterized by the repression and de facto police state imposed by the Ortega dictatorship. The siege against the independent press includes the blocking of raw materials for print. Other media have seen their offices ransacked and occupied by the Police.

Both publications are distributed by Editorial Nuevo Amanecer, owned by the Promerica financial group, with Nicaraguan capital, which acquired it in May 2011, after an economic crisis that almost led to the closure of El Nuevo Diario. The newspaper was close to its 40th birthday.

Journalists and staff of both publications confided that the announcement took them by surprise through social networks. The possible closure of the publications has been feared for several months.

More than 15 months of blocking

The Ortega government, through its Customs Office, has been holding back paper, ink and other materials for a year from Editorial Nuevo Amanecer, as well as to the Editorial Group La Prensa, which distributes the newspaper La Prensa and Hoy. 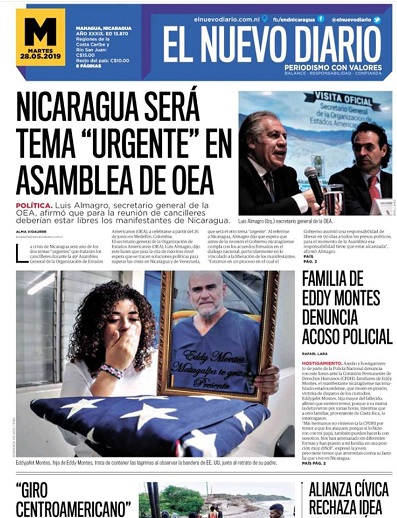 ember 6, 2018, “without any legal or administrative justification,” and on July 8, 2019, it delivered just 20% of the retained paper and a portion of other supplies, according to Editorial Nuevo Amanecer.

“After almost 40 years of informing Nicaraguan society without interruptions,” we suspend this work as of today (September 27), due to the adverse economic, technical and logistical circumstances it faces, stated the editorial.

The PEN International organization regretted the closure of El Nuevo Diario and its associated newspaper, Metro. “El Nuevo Diario, like the newspaper La Prensa, has been subject to an arbitrary and illegal customs boycott by the Ortega government, which imposed restrictions on the importation of paper, ink and other essential supplies as of 15 months ago.”

In an editorial published on the digital edition and its latest printed cover, the newspaper’s Board of Directors stated: “We are aware of the importance of El Nuevo Diario as a key means of communication in the journalistic coverage of several relevant stages in the recent history of Nicaragua, since its foundation in May 1980 until today.”

Last July, El Nuevo Diario had already been forced to change the format of the newspaper from standard newsprint to tabloid to survive more time.

The retention of raw material caused the newspaper to stop circulating on weekends since last December and reduce its number of pages to eight.

In December 2018, paper retention also made the popular newspaper Q’Hubo disappear, which also belonged to Editorial Nuevo Amanecer; while La Prensa and Hoy have chosen to reduce the number of their pages.

Since September of last year, the Ortega government retains 100% of the raw material of El Nuevo Diario and La Prensa, the main independent print news media of Nicaragua.

Customs has even ignored two resolutions of the Customs and Administrative Tax Court of Nicaragua, in which it admits three appeals filed by Editorial Nuevo Amanecer ordering the delivery of retained raw materials.

The Government had already pledged to release the raw materials of independent media last March, in agreements signed with the opposition Civic Alliance for Justice and Democracy, in the framework of negotiations to overcome the crisis. Ortega unilaterally terminated those talks on July 30.

Government policy towards the media in Nicaragua has also eliminated several television programs; a television channel’s facilities remain occupied by the National Police, and at least two radio stations have been repeatedly sabotaged.

The siege of the Police and paramilitary groups has led at least 90 journalists to go into exile, according to the Violeta Barrios de Chamorro Foundation, which between April 2018 and August 2019 recorded over a thousand cases of press freedom violations, including aggressions, censorship, threats and murder, among others.