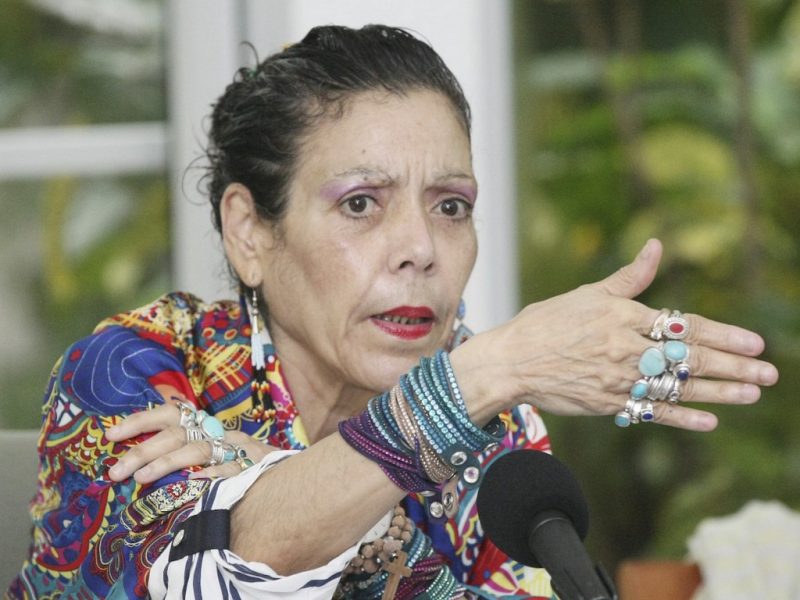 Murillo is outraged that hundreds of scientists and doctors do not share her point of view that Covid-19 is nothing more than a simple flu that affects Nicaragua very little, since the country has God and Daniel Ortega as its protectors and one of the world’s best health care systems.

According to Murillo, those beings from other planets have shrunken brains and hearts, and they are devoted to making alleged “fake news”, in reference to the reports made by people documenting “express burials”, in the midst of the COVID-19 pandemic in Nicaragua.

“Shrunken brains that work by receiving messages, they are like computers that activate when they receive messages from another galaxy, from other planets, they are supposedly stateless, they pretend to be that, but they really are just people that have no love for their country, they are unworthy people who are expecting spacecrafts to emit signals that activate their shrunken brains, their shrunken hearts”, said Murillo.

During the 45-minute sermon, Murillo continued her attacks on people she called “aliens”. “From computers in another galaxy, on another planet, they look for the support they cannot find among the good and simple people who work and live with Jesus Christ in their hearts, in our Nicaragua, that is the support they lack; and so they come from other planets, from another galaxy, and they believe they are activated. Brains weakened by ambition, by greed, weakened above all by the lack of faith and trust in God, the lack of understanding.

Murillo recalled for the second day in a row the neoliberal governments, pointing out that they did business with health, “we remember the darkness that reigned for 16 years when they denied our people  the right to health, education, to a good life, a life with rights, and appropriated the resources of the Nicaraguan people. We remember how they took over the resources of our people, and how they put thousands of families into the humiliation of extreme poverty while they became richer and richer.”

Murillo says those who seek to “destabilize” Nicaragua are the same as always. “The same last names that we find throughout history, the traitors, that while the people were without health, looking for food, they stripped us of everything (…)

To avoid having to give any type of help to the population, the Ortega-Murillo government decided it was better to share little or no information about Covid-19 “as not to alarm people”. Meanwhile, the Citizens Observatory reports 1270 suspected Covid cases and more than 200 deaths in Nicaragua.