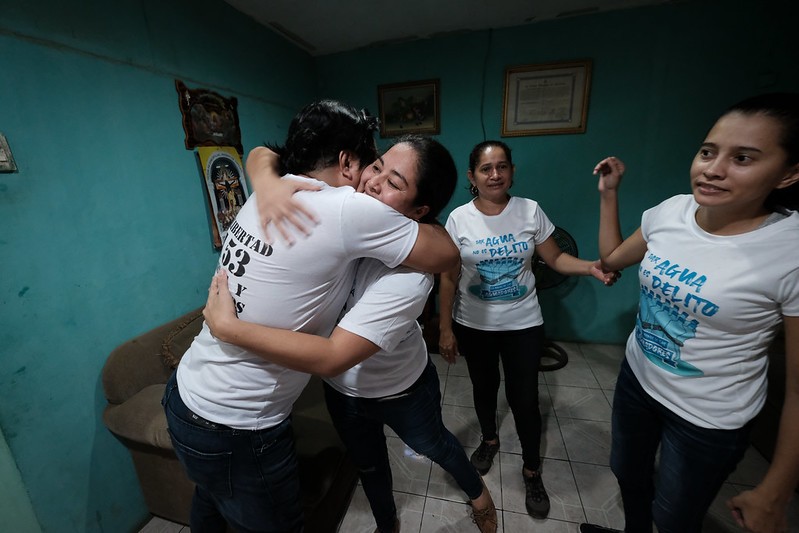 Ninety-one political prisoners of the 160 being held by the Ortega regime were released to house arrest at 2 am on December 30.

HAVANA TIMES – Early in the morning of Monday, December 30, the Ortega-Murillo regime released ninety-one political prisoners, among them the so-called “water-carriers.”  Lawyers, family members and spokespersons for the Civic Alliance confirmed the liberation, which is reportedly definitive for some, while others are under house arrest.

The Ortega regime, through the Ministry of Governance, “ratifies their willingness to contribute to national reconciliation and family togetherness for the harmonious coexistence that our Nicaragua deserves,” asserted the government communique. “They’ve been reintegrated into their homes subject to the pertinent obligations and responsibilities of the special family coexistence [house arrest] provision.”

“We got out! We did it!” shouted Olga Valle, one of those in the “water-carriers”, a group of young people and activists who were jailed on criminal charges for bringing water to the women on a hunger strike in the San Miguel Archangel Church in Masaya last November.  “There were some prisoners freed from the La Modelo men’s prison and others.  We don’t know who,” affirmed Valle in a video posted on social media shortly after her release.

The initial list of prisoners released, included the following 30:

A  complete list of the released prisoners, as of later on Monday morning, December 30, can be found here.

“Today fills us with hope. Thank God, they’re releasing the political prisoners including the water carriers. We give special recognition to the Apostolic Nuncio for his humanitarian labor and his participation in this effort,” said Jose Adan Aguerri, president of Cosep, the Superior Council of Private Enterprise, and a member of the Civic Alliance.

“In addition to the efforts of the Nuncio’s office, so many efforts came together to achieve this result: internal pressure, pressure from the international community and above all the efforts of the family members of the political prisoners.”

“We know that it’s not complete liberation, it’s house arrest, but despite that I’m happy because I’ll have my daughter at home. I can care for her, and keep a close watch on her health. I’m full of joy, but we must be clear that the struggle continues. There must be a radical change, because until we’re free, we’ll always have the anguishing uncertainty we’re experiencing,” expressed Tamara Zamora, mother of Amaya Coppens and a member of the Parents of Political Prisoners Committee.

Zamora emphasized that they would continue to be united and not slow their struggle against the Ortega regime. “I think that now more than ever we have to be organized and have a firm position. If what’s coming are early elections, first we must transform the electoral and judicial systems,” she asserted.

The family members of the political prisoners had maintained a campaign called: “Christmas without political prisoners”, consisting of a series of legal and social actions organized by the Association of Political Prisoners’ Family Members in order to convince the regime to free more than 160 dissenters, often falsely accused and convicted of criminal offenses.  Their strategy included two hunger strikes involving 14 women.

One of these was suspended following nine days without food and little water, in order to spare the life of a priest who had found himself blockaded into his church along with the family members.  The Masaya Police had maintained a tight cordon around the church, denying those inside water, electricity or access to medicines or humanitarian aid.

The second hunger strike was mounted in the Managua Cathedral by five women, but this was suspended almost immediately due to an attack and threats by Sandinista sympathizers.

The efforts of all the national and international groups weren’t heeded until after Christmas, on the final Monday of the year.  According to estimates, there were 160 political prisoners in the regime’s prisons, of whom 91 were released.

“Spending Christmas without our children was horrible, terrible; we believed that we were going to be able to spend it with them. However, we continue in the struggle,” declared Diana Lacayo, president of the Association of Political Prisoners’ Family Members. She stated that she was happy to have her son, Scannierth Merlo Lacayo, back home after more than a year in the penitentiary in Tipitapa.