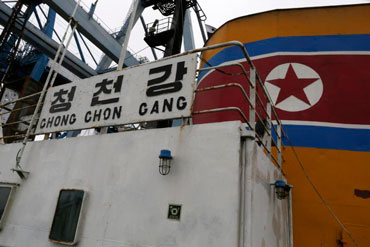 HAVANA TIMES — The North Korean ship Chong Chon Gang, detained in Panama in July 2013 for illegally carrying Cuban weapons, -and released in February 2014-, has returned to the canal from Cuba with a new load of sugar and given the green light this time to proceed to North Korea, AFP reported Wednesday.

According to the canal route administrator, Jorge Quijano, this time the ship passed a “very detailed” inspection and can continue to travel, loaded with 10,200 tons of sugar.

The search was carried out not only by the usual staff of the Panama Canal Authority, which performs these tasks on every boat that crosses the canal, but also by policemen of the National Air-Sea System, said Quijano.

For its violation last year with the hidden Cuban weapons, the North Korean freighter was fined a million dollars for endangering the safety of the Canal.