Funes, who is being investigated for alleged unlawful enrichment, asked for exile a week after he denied he was interested in doing this.

HAVANA TIMES — El Salvador’s former president, Mauricio Funes Cartagena, who is being investigated for illicit enrichment and another four crimes in his country, has received authorization for his political asylum in Nicaragua, along with this wife Ada Mitchell Guzman Siguenza,  better known as “Michy”, and their three children aged 34, 24 and 1 and a half years old. He requested asylum on September 1st from Nicaragua’s Ministry of Foreign Affairs, according to what the government newspaper La Gaceta confirmed on Tuesday.

The request was put in just a week after this same former president denied, on his Twitter account that he would or was going to ask for asylum in Nicaragua, where he stated that he carries out consultancy work regarding “Central American integration”.

Funes is being investigated on charges for unlawful enrichment, embezzlement, misappropriation of funds, illegal business activities and influence peddling during his presidential term (2009-2014). El Salvador’s attorney general, Douglas Melendez, stated that Funes had asked for asylum in Nicaragua on August 23rd.

However, according to the Ministry of Foreign Affair’s statement, Funes had argued in his request for asylum that “his life and physical integrity were in danger, like that of his family, for fighting in favor of democracy, peace, justice and human rights as well as his political affiliations in the Republic of El Salvador.”

Funes, who served after being elected by the governing FMLN party in 2009, has been seen in Managua since mid-August, under the custody of two National Police bodyguards, which, according to him, were assigned to him because of his former president status. His home is located in Las Colinas, one of Nicaragua’s most exclusive neighborhoods, where there is strict vigilance. 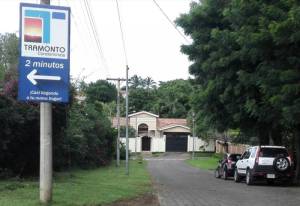 Confidencial director, Carlos Fernando Chamorro, had a brief conversation with Funes when he saw him being accompanied by policemen in Managua.

El Salvador’s newspaper El Faro tells us that Funes was already in Nicaragua when the Salvadoran’s District Attorney’s Office carried out a series of unexpected raids at companies belonging to businessman Miguel Menendez, better known as “Mecafe”, linked to a conspiracy of favors and granting of loans to third-parties via the state-run Banco Hipotecario. “One of these loans ended up benefitting a company which much later would set up a Spa in a residential complex in El Salvador’s capital. Behind this Spa was Ada Mitchell Guzman Siguenza, the former president’s current wife and mother of his youngest child,” reviews the newspaper.

Martinez reminded us that the attorney general, Douglas Melendez, had warned of the former president’s request for political asylum in Nicaragua. It’s been two weeks now since the homes of Funes and his wife Mitchell Guzman Siguenza were seized and broken into, where the District Attorney’s Office found documents that confirmed money and house transfers.

“We are analyzing all of the documents we’ve seized and furthermore, the District Attorney’s Office has frozen their bank accounts and confiscated some of their assets,” Martinez said.

Among the assets confiscated were two trucks loaded with Mitchell Guzman Siguenza’s personal belongings which were heading towards Nicaragua, on August 20th.

“In the trucks, there were all kinds of furniture, electrical appliances, beds, etc. The first one was intercepted at the Guzman household and the second one was handed over by the truck company that had been hired, which decided to turn it in when they’d seen the news,” Martinez told Confidencial.

In February 2016, El Faro revealed that a division of the Supreme Court of El Salvador, had highlighted the purchase of 198,600 USDs worth of vehicles registered in the name of Funes and two of his five children as an irregularity in the former president’s asset declarations. A sum of “198,000 USD which don’t appear in the former president’s bank statements and aren’t justified in the formal incomes that his two children reported either,” the newspaper reported.

The authorities determined that Funes’ son didn’t have the economic means to buy these vehicles. According to El Faro, the former FMLN president is also involved in two other conspiracies with millions of dollars coming from public funds to award publicity and private security contracts to two of his friends.

The Attorney General, Melendez, isn’t currently in El Salvador and therefore we couldn’t get his statement on the political asylum that has been granted by Comandante Ortega.

The General Counsel of the Nicaraguan Center for Human Rights (CENIDH) reminded us that our country forms part of the Inter-American Convention against Corruption, and therefore, is obligated “to facilitate and collaborate with States who are looking for accused individuals.”

“The Nicaraguan Constitution establishes in article 42 that asylum can be given to somebody who fights for peace and defends the human rights of their country, and whose life is in serious danger… However, those who are being investigated for corruption will be dealt with according to this Convention,” maintains the CENIDH chief legal advisor Gonzalo Carrion.

However, Nicaragua’s ministerial resolution chose instead to mention that “Nicaragua respects and complies with the Asylum Convention and ratified Human Rights and Humanitarian Rights documents, which establish that it is within the host State’s sovereign power to grant Asylum.”