HAVANA TIMES – For four months, the Nicaraguan Customs Office has been sitting on the materials needed to print two Nicaraguan newspapers put out by the La Prensa editorial group: Hoy  [Today] and La Prensa. The editorial company is seeking alternatives to stretch the materials they still have on inventory and extend the life of both newspapers’ print editions.

If this arbitrary retention of materials isn’t resolved, special measures will be needed in the next weeks to avoid halting the print editions of both media.  If the illegal intransigence persists beyond that, both La Prensa and Hoy will be obligated to inform exclusively over a digital platform.

“We’re going to battle with it as long as we can, and with all the legal resources at our disposal, and we’re going to continue bringing the news to our readers. We’re studying the adjustments that can be made [with the materials on inventory] so as to last as long as we can,” stated Jaime Chamorro Cardenal, director of the La Prensa newspaper and president of the editorial group of the same name.

The measure taken by the customs office can only be interpreted as another attack of the Ortega-Murillo regime on Nicaraguans’ right to freedom of expression and information. In Venezuela, first Hugo Chavez and now Nicolas Maduro has utilized the same policy to eliminate the print versions of the majority of the opposition publications.

Customs turns deaf ear to the Constitution and the Tribunal

Since last September 10, the Head Customs Office (Direccion General de Servicios Aduaneros, or DGE) has illegally retained a quantity of materials needed to print and distribute the newspapers. Items being held include plates, sheaths and developers for the printing presses with a cost of nearly US $70,000; spare parts for the printing press laminator; 92 tons of newsprint paper with a cost exceeding US $72,000; and US $46,000 worth of ink and indispensable solutions for printing the newspapers. 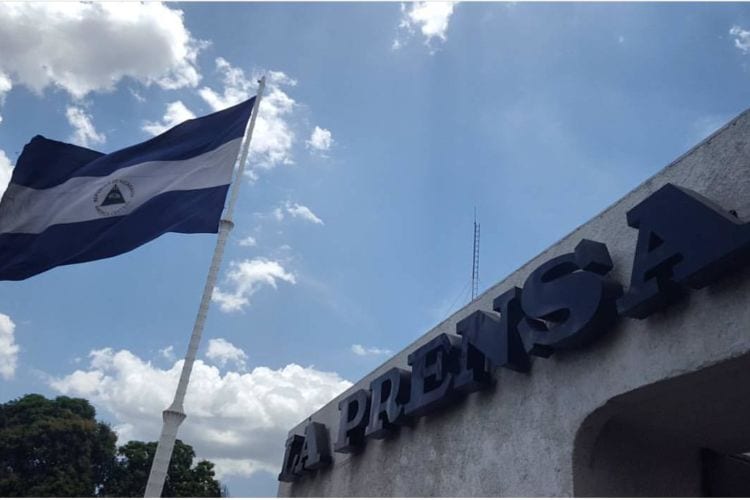 The plates, sheaths and developers arrived in the country on September 10, and the other shipments on different dates in October.  According to the Nicaraguan Constitution, all should be duty-free, but requests for these exemptions remain without response.  In addition, due to the urgent need for the spare parts and in order to avoid the delays that other shipments are encountering, the company opted to pay the tariffs on these instead of requesting the exemption they have the right to.  Despite paying $700 in taxes on equipment worth a total of $5,000, these items are also being held in the central customs office.

All the retained materials remain in a fiscal warehouse and the editorial company is expected to pay for storage due to the intransigence of the Customs office – a bill of $1,795 through December 27 for the paper and ink alone.

Last November, a document regarding the retention of the plates, sheaths and developers was submitted to the Administrative Tribunal of Customs and Taxation, who admitted the complaint. Nonetheless, up until now the Customs department still refuses to turn over the merchandise.

Reduce the consumption of paper and ink

Previous to the crisis that the country has faced since April, there were already some delays in the customs office’s processing and releasing the imports needed for printing the newspapers, but they hadn’t been as serious.

Now, while these materials remain trapped in customs, the editorial company won’t order any more imports, since up until the present, even paying taxes that by law shouldn’t be charged hasn’t allowed them to obtain their merchandise.

The 92 tons of paper being held would guarantee three months of print editions of both La Prensa and Hoy.

Given that paper and ink are basic inputs needed to print the newspapers, the editorial’s efforts to continue printing will have to focus on cutting back on the use of these raw materials. Different alternatives for reducing paper consumption are being studied, so as to stretch the materials on hand, in hopes that the regime will allow the materials to enter, explained Jaime Chamorro.

“It isn’t up to us, but what we hope is that it’s a temporary situation; otherwise they’re going to end it all,” Chamorro concluded.