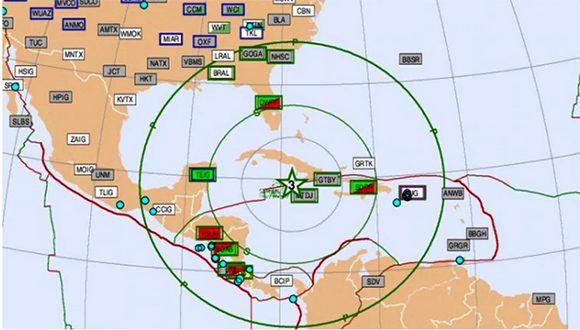 HAVANA TIMES (dpa) – A 7.7-strong earthquake on Tuesday rocked the Caribbean between Cuba and Jamaica, while the Cayman Islands’ disaster management agency and the Cuban Seismology Research Center said there was no threat of a tsunami.

The epicenter of the quake was at a depth of 10 kilometers at 125 kilometers northwest of Lucea, Jamaica, according to the US Geological Survey.

The earthquake was felt in much of Cuba, including the center and the east, the official news agency Prensa Latina reported. It was also felt in Miami, Florida.

The quake led to the evacuation of some high-rise buildings in the capital, Havana, though no damage was immediately reported.

In the Bahamas, a cabinet meeting was interrupted when the building began to shake, daily The Tribune reported.

In the Cayman Islands, several sinkholes opened up and at least one property was structurally damaged, but “the tsunami threat from this earthquake has … passed and there is no further threat,” the British territory’s disaster management agency said.

There were no initial reports of injuries.

One thought on “Powerful Quake Rocks Caribbean, No Tsunami Expected”