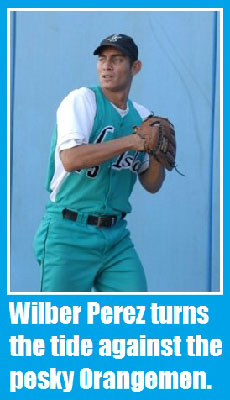 HAVANA TIMES — Cuba surged back into the lead here in Rotterdam tonight mainly on the strength of some masterful pitching by a pair of Isla stalwarts. Gutsy 36-year-old southpaw Wilbur Pérez got the call from manager Yovani Aragón for the vital must-win starting assignment and responded in heroic fashion with a neat 7-plus-inning effort that yielded only four base knocks.

Pérez had to work out of only two brief scrapes, the first coming in the third frame (two runners stranded) and the second in fifth (the bases left jammed). He struck out seven while walking five.

When Pérez wilted slightly in the eighth he was rescued by 23-year old Isla teammate Raciel Iglesias who left runners stranded in scoring position in both the eighth and ninth and picked up his second save of the week.

In addition to the fine mound work during the second showdown with the rival Dutch, Cuban hitters finally were able to string together some timely base knocks.

Yadiel Hernández (pinch hitting for Matanzas teammate Guillermo Heredia) struck the big blow with a run-producing eighth-inning single to break the ice against equally strong Dutch starter Orlando Yntema.  Then Eriel Sánchez singled home a pair of welcomed insurance runs in the top of the ninth.

Through the first seven innings Yntema had continued the momentum begun by Rob Cordemans on Sunday, allowing only a quartet of Cuban singles and nothing in the way of a major offensive uprising.

Cuba has now beaten the Dutch twice in the last seven outings and ironically the two victories have been almost carbon copies. Last summer in Haarlem Vladimir García blanked Holland by the identical 4-0 tally to sandwich a lone victory in between the pair of setbacks at the 2011 Panama World Cup and the twin disasters this past March in Tokyo.

In the last seven Cuba-Holland encounters there have now been a trio of shutouts and Cuba owns two of them. But each blanking has come against a Dutch club stripped of top professionals serving in the big leagues or in the top-level minor league circuits.

Cuba now has put its tournament fate in its own hands. As long as there is no stumble on Saturday against last-place Curacao, a single win in the pair of matches on deck versus Taiwan will be sufficient to vault Aragón and company into Sunday’s finale.

One needed victory over the Chinese on either Thursday night or Friday afternoon will mean that Saturday’s Taipei-Netherlands clash will leave one of that pair with three defeats and thus on the outside looking in.

A final 4-2 Cuban record would mean a leg up on any team that drops three matches. The probable scenario still remains a Cuba-Netherlands rematch with both the tournament title and further boasting rights squarely on the table.

One great irony of the tournament is that Cuba has so far owned the best pitching despite all the shortcoming of its small seven-man staff.  Aragón has been able to get into the seventh frame with his starters in two of three matches, has kept the bullpen innings of Iglesias (2.2 innings with 2 saves) and Jorge Hernández (4.1 innings) to a minimum, has used Duniel Ibarra (0.2 innings) only once, and still has a fresh unused starter in Vladimir Baños.

The islanders are the only club owning two shutouts victories, and despite the seven runs permitted in the Dutch loss, they have yielded the fewest opposition tallies, two fewer than the Netherlands. Runs permitted carry vital importance in this event as they constitute the primary tiebreaker in the event of a deadlock in the standings at week’s end.

Aragón’s three starters have now worked a total of 19.1 innings, allowing but four tallies (all versus Entenza), 16 base hits, and a mere two extra base knocks (both doubles off Entenza). Of the three relievers used (Iglesias twice, Jorge Hernández and Duniel Ibarra), only Hernández has experienced a single rocky inning. But Hernández was also untouched in the first three innings worked against the Dutch on Sunday.

(*) Peter Bjarkman is author of A History of Cuban Baseball, 1864-2006 (McFarland, 2007) and is widely recognized as a leading authority on Cuban baseball, past and present. He has reported on Cuban League action and the Cuban national team as senior writer for www.BaseballdeCuba.com during the past six-plus years and is currently writing a book on the history of Cuba’s post-revolution national team.