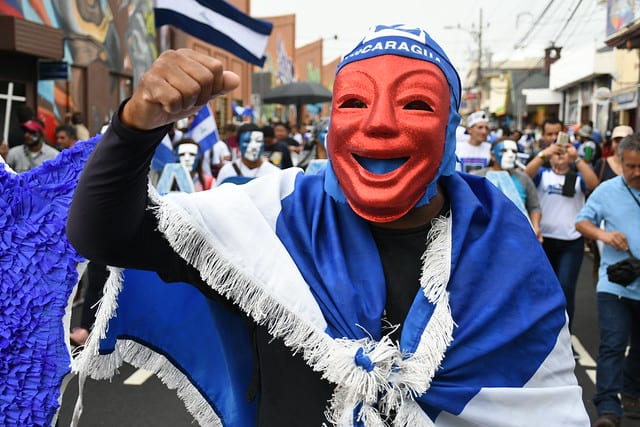 HAVANA TIMES – While much of Nicaragua was jubilantly following the release of political prisoners on Tuesday, the United States Congress held a public hearing that addressed the national crisis, focused on the actions that country could take regarding the Ortega-Murillo regime, only a week and a half before the State Department’s 180 day deadline set by the Nica Act to expire, to present a report with specific measures to be implemented.

The audience was convened by the Foreign Relations Committee and the Western Hemisphere Subcommittee, the later led by the democratic representative from New Jersey, Albio Sires, who has promoted US actions for the Nicaraguan crisis in the lower house. The session focused on an update on the current crisis situation and recommendations for US foreign policy regarding Managua.

The congress representatives listened to Felix Maradiaga, Director of the Institute of Strategic Studies and Public Policy; Jose Miguel Vivanco, Director of Human Rights Watch, and Carlos Ponce of the Victims of Communism Foundation.

Maradiaga told Confidencial that this session will help Congress to draw its own conclusions and present them to the US internal agencies, such as the State Department, and to the hemispheric allies and the international community of Washington, which maintains diplomatic pressure on the Ortega government through international sanctions.

“In the presentation, I emphasized that in Nicaragua the repression and police state continues. As well as the way Ortega has used political prisoners as bargaining chips, something that we consider immoral,” said Maradiaga. “Even though we told them that on Tuesday they released political prisoners, we explained that it was not full liberation, because they are people who leave without their guarantees restored…besides they were always innocent.”

Although the congress people listened to the speakers most of the session, they asked them about some specific points. One of them was that if in addition to applying sanctions, the United States should block access to the CAFTA free trade agreement to the Ortega government.

In this regard, Jose Miguel Vivanco recommended strengthening international sanctions against senior officials of the regime “responsible for abuses, including the prohibition of entry into the country and freezing their assets.”

“At Human Rights Watch, we are extremely concerned that those responsible for human rights violations in Nicaragua have not been held accountable for their abuses,” Vivanco said. “The United States government should adopt a strong stance against atrocities in Nicaragua through the imposition of individual sanctions directed against high officials who are responsible for very serious abuses.”

Maradiaga said that the representatives asked if it was possible for crimes against humanity to have been committed without Daniel Ortega knowing, to which he responded negatively. “I said no. Ortega controls the armed forces,” he emphasized.

Although in Washington there is talk of new candidates within the regime for sanctions, Carlos Ponce recommended not only sanctions on the inner circle of the presidential couple, but also policemen, mayors, among other state officials and Sandinista political operators.

Maradiaga assured that the State Department report is already nearing completion, as mandated by the 180-day term of the Nica Act. Although Maradiaga did not specify whether this session in Congress will influence that report, he did say that he held several meetings with congressional advisers to determine more measures of pressure on the regime.

“However, we told the congress people today that the Nica Act is an underused tool, because until now only individual sanctions have been applied through the Global Magnitsky Law,” Maradiaga affirmed.

Carlos Ponce told Confidencial that one of the reasons why the Nica Act has not been implemented in its entirety could lie in the fact that the State Department and the US Ambassador in Managua, Kevin Sullivan, hope that the Ortega government “will sit down to negotiate an electoral reform to advance the elections.”

“Maybe it was the release of political prisoners and for that reason they have not been strong with the Nica Act,” said Ponce. However, he stressed the importance of the session on Tuesday, reflected by the high number of congressmen who attended it.