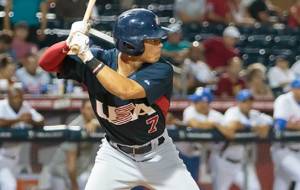 HAVANA TIMES — Three USA pitchers, Daulton Jefferies, Logan Shore and Stephen Nogosek, combined on Thursday night at the Durham Bulls Athletic Park, in North Carolina to extend to 18 the consecutive scones suffered by Cuba in the first two of a five-game 2015 exhibition series between the two rivals, reported Ray Otero of baseballdecuba.com.

Cuba was limited to 3 hits on Thursday, after losing to a no-hitter on Wednesday from another trio of USA pitchers (Tanner Houck, AJ Puk and Ryan Hendrix). Both games ended with the score 2-0.

Exactly as on Wednesday, the game was scoreless until the sixth inning when a sacrifice fly put the USA ahead to stay.

With the score 1-0, JJ Schwarz belted a long solo homer off reliever Yander Guevara in the seventh inning to take a 2-0 lead.

For Cuba the right-hander Yosvany Torres (0-1) was the starter and charged with the loss, while Logan Shore (1-0), the first reliever for Team USA, obtained the victory.

The teams are tuning up for the  upcoming Toronto Pan American Games.