A group of 27 intellectuals, journalists and politicians express their concern over Nicaragua’s political situation 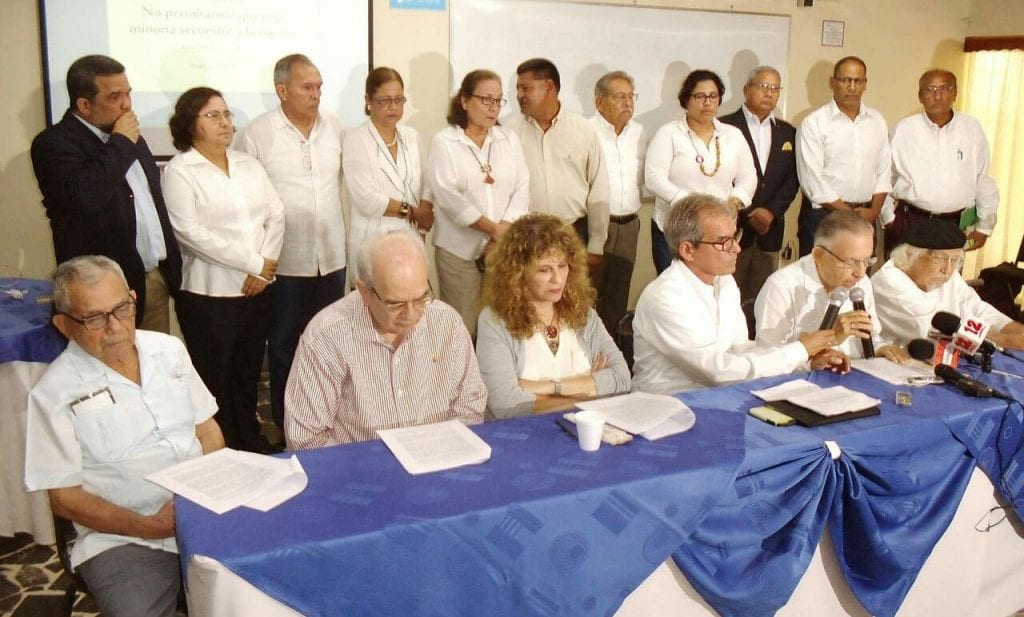 HAVANA TIMES — More than forty years ago, a group of 27 personalities from Nicaraguan politics, academia and the economy published a manifesto that demanded that Somoza’s government hold and respect free elections. This Thursday, a similar document was presented in Managua. A new version of the Group of 27 presented a manifesto titled No permitamos que una minoria secuestre a la nacion (“We will not allow a minority to hijack the country”), demanding that the government of Daniel Ortega hold free and transparent elections, “the only civilized means of choosing government authorities and defining the country’s course.”

The document, read before the press, underscores the fact the elections scheduled for November 6 “must be completely free, devoid of any coercion or abuse of any sort, guaranteeing equality for all contenders and an honest and transparent vote.”

In their communiqué, the Group of 27, made up of intellectuals, academics, writers, politicians and leaders of civil society organizations also question the lack of credibility and ineptness of the Supreme Electoral Council, believing it incapable of administering the voting process. “The absolute power wielded by the group headed by the president, the corrupt collaboration of some factions supportive of the government, the concealment of information and countless irregularities reported during the last elections, have turned the Electoral Council into a failed institution and an apparatus designed for fraud,” the manifesto stresses.

They also noted that six months before the presidential elections, the Council has not applied the recommendations made by the national and international election observer organizations. “In fact, at this time, no serious international election observation organization, like the European Union, the OAS, the Carter Center, likewise any national observer organization, has been invited.” This leads to “serious doubts on the credibility of the current process and its possible results.”

Adolfo Bonilla, a senior citizen over 70 who also signed the 1974 Group of 27 declaration – in opposition to dictator Anastasio Somoza’s intentions of being reelected through fraud – was among the signatories of the document.

The 1974 manifesto added that “the government is bent on distancing Nicaraguans from the electoral path, unscrupulously reserving the right to administer all mechanisms, from registration to scrutiny, that will allow it to reach the aims it wants (…) This stubborn intent is an open provocation to the people, who will be forced to legitimately search for other procedures to arrive at its own solutions, and the government will be directly responsible for this.”

Writer Gioconda Belli, a member of the new group, questioned the way in which power has become concentrated in the figures of Daniel Ortega and the first lady, Rosario Murillo. “No one can challenge power because all power is concentrated in two people,” the poet said, regretting having to make pronouncements against an authoritarian government, in much the same way citizens had to do 42 years ago against the dictator Somoza. “It is very sad for me to say that this government, which stems from the Sandinista revolution, is repeating the country’s dark cycle,” Belli stated.

Radio businessman and former opposition presidential candidate (2011) Fabio Gadea is among the 27. Gadea decided not to accept the candidacy to run in the November elections because “there are no indications that transparent elections will be held.” However, Gadea insisted that citizens vote because according to experts “it’s worse not to go.”

Another signatory of the manifesto was deputy for the opposition Carlos Langrand, who focused his criticisms on Ortega’s government in the “rapid deterioration of democratic institutions and an unchecked accumulation of power, the arbitrary exercise of authority and the systematic violation of human rights and the persecution and boycott of the independent press.”

Langrand, who is also one of the parliamentary representatives with the most information about economic issues, questioned the way cooperation with Venezuela has been handled, the growth of the foreign debt, increased unemployment, dropping wages and the widespread perception of State corruption, measured by international organizations.