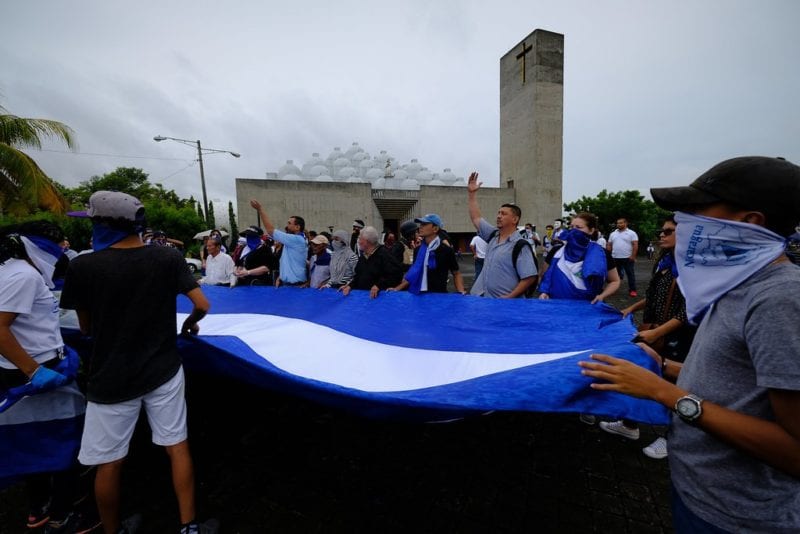 HAVANA TIMES – In a week, the dictatorship of Ortega Murillo suffered four important political defeats that have imprinted a new dynamic on the country: although the impasse remains, the Blue and White Movement has clearly taken up the political initiative.

Let’s see which are the four processes that are modifying the tendency of inertia, that perception of a “draw” and stagnation of the political crisis, which previously favored Ortega.

The withdrawal of the Alliance

The decision of the Civic Alliance for Justice and Democracy to suspend negotiations, after the murder of Eddy Montes in jail, and condition its return to the freedom of all political prisoners, left adrift Ortega’s strategy of promising without fulfilling. More importantly: it cleared the Alliance a path to seek a new route of political pressure, with the call for a revitalized national strike.

Ortega responded by clinging to the official monologue and offered unilateral measures: release of prisoners without liberating them; electoral reforms only with the OAS; promises of restitution of conditional rights, and an empty plan for the return of exiles.

From the outset, it is doubtful that the OAS Secretary General would endorse a unilateral electoral reform, without the opposition, and without attacking the root causes of the human rights crisis. But in the desperate race of Luis Almagro for his reelection in the OAS, everything is possible, even imposing a bad deal in Nicaragua. Because of that, in the end, the future of the country will depend on the new dynamic of civic pressure promoted by the Alliance, if the unilateral agenda of Ortega fails, or if it manages to have some viability to keep him in power until 2021.

The moral leadership of the prisoners

In spite of the tortures, solitary confinement, and the pressures against their relatives, Ortega has never been able to buy, nor co-opt, nor break the morale of a single political prisoner, and rather they have come out of prison with an extraordinary will to struggle, demanding that all the prisoners recover their freedom.

There are still 138 political prisoners in the prisons, among them the main leaders of the civic protests, which the regime maintains as hostages. Will Ortega comply with the agreement to release them by June 18? Can the dictatorship sustain itself if the prisoners recover all their political rights and return to lead the protests in the streets?

It is highly unlikely that Ortega can stay in power. The release of the political prisoners, therefore, can only be possible as a conquest of the national protest, with the support of the international community, and not as the result of an exchange at the negotiating table.

The resolution of the Permanent Council of the Organization of American States (OAS), with the support of 20 countries on the continent, and only three votes against—among them Ortega’s—reveals, as happened with Somoza in 1979, the continental isolation of the dictatorship and the failure to convince of its official lies.

The resolution demands the release of the prisoners, the return to Nicaragua of the Inter-American Commission on Human Rights (IACHR), the reestablishment of public freedoms, and electoral reforms—negotiated with the Civic Alliance–, to hold free and transparent elections.

Beyond Almagro’s political calculation and if he would agree to negotiate only with Ortega, the question is how the OAS Foreign Minister’s Assembly, which meets on June 26, will respond to Ortega’s unilateral measures, and if with the vote of El Salvador and at least three of the countries that abstained on May 21, the 24 votes necessary for the definitive application of the Inter-American Democratic Charter could be gathered.

The success of the national strike of citizens, businesses and consumers has put the potential of civic struggle as a force for change in the foreground. Despite the police deployment, Managua City Hall’s threats against market merchants, and pressures from the DGI tax office, the Superintendent of Banks and MIFIC against employers, the strike emptied the streets of the entire country. The same streets that will be flooded with blue and white flags, at the moment when the people recover the right to free mobilization and freedom of expression, that have been infringed by the regime.

The national strike confirmed that the dictatorship has no more allies than the Army and public employees, who provide it with conditional support owing to the control it still has over public finances. Ortega has lost the support of businesspeople, small, medium and large, who demand an immediate political solution to the national crisis, to solve the economic crisis.

However, in addition, the strike demonstrates that the key to unlocking the political negotiation does not lie in the international sanctions, nor in the national economic elites, but in the civic pressure, in the thousands of citizens that have the power to fill and empty the streets and will decide tomorrow with their votes the destiny of the country in a democratic election. It was consumers, who emptied the bank branches and commercial establishments which opened their doors under the pressure of the regime, and have the power to neutralize the reprisals of the regime.

The overlap of these four factors: the strategy of the Civic Alliance, the call and moral strength of the political prisoners, the OAS condemnation and the new sanctions that weigh on Ortega, and the forcefulness of the national strike, has sent a loud and clear message to the whole nation. Will the Sandinista entrepreneurs, ministers and magistrates of the Government, the Military Council of the Nicaraguan Army, and mayors and deputies of the FSLN hear it?

A political solution increasingly depends less and less on the absent ruler, and more on the political, businesses and military environment that surrounds it. Aligned with the alliance of Cuba and Venezuela, which aims to prolong the agony of Maduro, Ortega disowned his negotiators at the dialogue table and is clinging to maintaining a police state, as he demonstrated this Sunday faced with the march called by the Blue and White National Unity movement.

At its final crossroads, the dictator does not envision a middle ground: his destiny is that of total power or nothing. On the other hand, for the party leadership, what is at stake is a wide range of economic, political and institutional interests, which would be a matter of negotiation in a democratic transition. They face the dilemma of sinking with the ruling family and replicate the 1979 crisis or, if they distance themselves from the massacre, facilitate a political solution that begins with the total liberation of the political prisoners and ends with the electoral reform to call early elections, without Ortega and without Murillo.

From the pressure exerted by the Civic Alliance, the National Unity movement, and the political prisoners, with the support of big business and the international community, depends whether this democratic block begins to be recognized as an alternative to power by the supporters of the regime. The next step will be to offer incentives and build bridges, which make possible a negotiated transition.