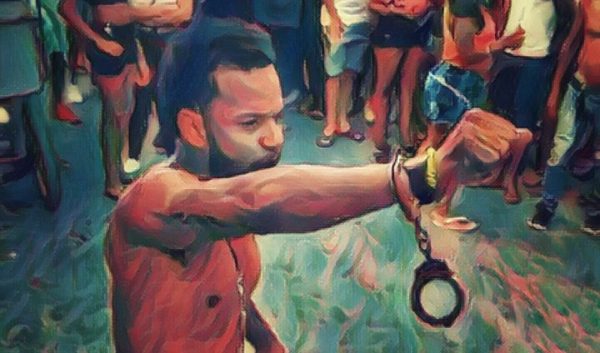 Maykel Osorbo of the San Isidro Movement based on the poor side of Old Havana.

HAVANA TIMES – This is the story of two Cubans behind bars, both of them calling for justice, with the big difference that each of their fates are being marked by the country where they are being held prisoner: Maykel in his homeland, Cuba, and Rogel, who had escaped to the neighbor 90 miles North.

Jared Polis, the governor of Colorado, reduced a 110-year prison sentence to 10 years for truck driver Rogel Aguilera, believing that the trial judge’s sentence, which strictly adhered to the Law, was however, “highly atypical and excessive,” according to the words Polis personally wrote to the convict.

A rapper whose artistic name is Maykel Osorbo has repeated he won’t leave his birth country, and he has been rotting in prison for eight months, with countless obstacles in his defense’s normal practice. In addition his family receive constant threats to even lose the basic right to a visit Maykel every 45 days, subject to their behavior and opinions voiced about human rights in the country where they were born.

The problem of how the Law works and sacred respect for individual rights, which are innate to the human condition, is maybe the most important clash that exists between the two countries, which is hidden behind political discourse.

Rogel is 23 years old, he committed serious infringements when driving, and involuntarily contributed to the death of four people, injuring another ten and considerable material damage. In fair vindication, his case was amplified on an unrestricted Internet in a country where the media is not in the State’s control, and is far-removed from the opinions of a single political party that is allowed and governs.

A sociological phenomenon took place which is worth pointing out: social media collected almost 5 million signatures in just a few months, demanding a reduction in Rogel’s disproportionate sentence. The cause was supported by many celebrities, including Shakira and the Kardashian. Do you think they know about Maykel?

Let me tell you why they are killing this black Cuban in the notorious “5 y ½” prison, Papillon’s creole-style Guyana, in Pinar del Rio. If only the millions of activists who fight against discrimination of Afro-descendents, including Black Lives Matter members, were to sign my petition, including the celebrities who supported the just demand for the unfortunate truck driver.

Maykel was living in the very poor San Isidro neighborhood in very touristy Old Havana. Before Coronavirus, visitors would normally walk down the street that gives the neighborhood its name, giving a dollar or two to some residents, hospitable as is our custom.

It just so happened that the poor people in San Isidro, “subversively” brainwashed – the Government says – by artists that live there, including rapper Maikel and performance artist Luis Manuel Otero (another black man), began to question why the kingdom of prosperity promised by the bearded Comandante for decades hadn’t yet come knocking on their door, and why they were being harassed by the police every time they spoke out against the Government.

The San Isidro Movement (MSI) was born, firstly to protest a decree-law that would regulate the possession and exhibition of artworks, even in their own homes. Luis Manuel took to the street, staging a performance by wearing a Cuban flag, a crime according to the current judicial system, and he has been taken to prison on dozens of occasions. He is now at risk of dying behind bars.

Meanwhile, Maykel resisted one of the continuous arrests he was victim to, without a legal warrant, or charges against him, on April 4, 2021. On that day, with the strength of his right fist breaking the handcuff that kept him tied up, while neighbors supported him, stopping a patrol car full of police from arresting him. The photo of “El Osorbo” (almost a curse word in the old slave language Yoruba), fist raised high, a broken handcuff, became a freedom symbol, the incontestable complaint against a dictatorship.

Luis Manuel was recently named one of the 100 most influential people in 2021 by Time Magazine, and Maykel recorded in Cuba, in absolute secrecy, fragments of the memorable music video Patria y Vida, which won two Latin Grammys this year.

Taking to the street and singing Patria y Vida is a punishable crime, as it is a clear rejection of the 60-year-old slogan Patria o Muerte, which the highest leader of the nation demanded of all Cubans from the day he proclaimed Cuba a Socialist state.

Maykel Osorbo is suffering strange skin symptons of a disease that has nothing to do with his physical condition before his current stint in jail.

Maykel did not cause any physical or material harm to anyone in his country, his crimes are well-known according to Cuba’s brand of justice.

Medical negligence, leading to the murder of opponents to Castrismo, has been well-documented. A recent article by the Cuban Studies Institute deals with this sinister issue.

A thousand Cubans are in prison today, having received sentences or awaiting trial, repressors’ revenge for those who challenged an “order” presented to the world as an example of harmony between its people and leaders, has reached the point of sentencing minors, who are paying for their love for freedom behind bars, discrediting the validity of Communist indoctrination.

Every signature is an act of human dignity, breaking the dictatorship’s cuffs.

One thought on “A Million Signatures for Cuban Prisoner Maykel Osorbo”