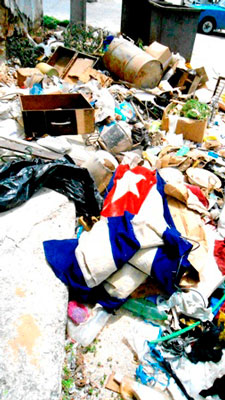 HAVANA TIMES — A year ends and another one begins – such is the circle of life. I often wonder why people congratulate one another on the street. Is it to celebrate the fact we are still alive? If that’s the reason, I can understand that.

What I did the most this past New Year’s was to observe the behavior of certain Cuban families closely.

The first thing I noticed in my neighborhood was that nearly no one refurbished or painted their homes, as they had done in previous years. I also didn’t get a sense people were eager to celebrate the beginning of 2014.

I decided to spend my underdeveloped New Year’s in one of the zones of Alamar, the large housing projects neighborhood where my mother and other relatives live.

To my surprise, at no point during the night did I hear music playing at any of the neighboring buildings, something which struck me as extremely odd.

Only later, after midnight, did a group of teenagers walk by the front of the building making a racket with pots and pans, but that’s it.

I suppose many people opted to watch the musicals on TV, which were so similar to the ones shown in previous years they made you want to turn in.

But that’s not all. The next morning, when I got back home, I decided to take a stroll down the block, to see what the neighborhood felt like. Everything was the same: the streets were dirty, people were looking for food and the familiar neglect was everywhere.

At a street corner, I came upon a Cuban flag in a huge pile of garbage (I was able to take a picture to include it in this post).

I’d never seen anything like it:  people would walk past the garbage, see the flag there, left behind like a rag, and it meant nothing to them. Our flag was just more garbage to them.

This year started off on the wrong foot, I thought, cheerlessly.

I returned home, hoping that, one day, people’s lives would take a turn for the better, so that we can again celebrate the New Year with a great song and dance.

4 thoughts on “An Underdeveloped New Year’s in Havana”