In solidarity with artists who are suffering
the impact of Decree-Law 349. 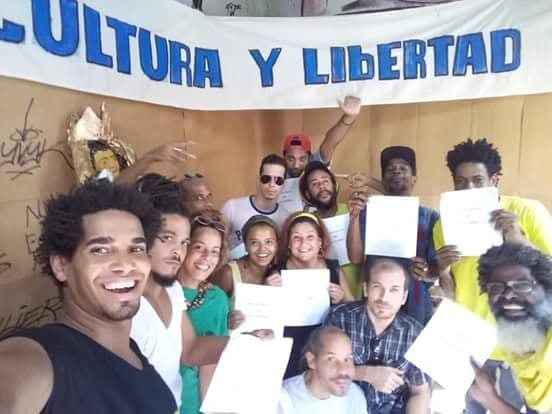 HAVANA TIMES – There’s no doubt that the story of independent artists and writers in Cuba today resembles that of Jose Marti.

There are many people who believe that saying anything about what is happening with Art in our country won’t change a thing. To all of those people, I would like to say that remaining silent in the face of injustice makes them accomplices. I strongly believe that anyone who silences the truth is the same as someone who is lying, and that change begins with a single word.

Independent art in Cuba is a dragon and if you cut off its head, others will grow in its place. This was the dragon that was sleeping, there wasn’t any need to wake it up, or was there? Sleeping is a restorative activity.

Independent artists and writers in Cuba, the ones who never had a publishing house who dared to publish them, the ones that never had a record deal, the ones who were rejected from art schools or kicked out of them or refused a diploma at the end, these artists, the ones that couldn’t or didn’t want to become a member of the Hermanos Saiz Association or the National Union of Writers and Artists, the ones who learned to draw with the same pencils they used for their homework, the ones who work in theater when they can, the ones who dedicate hours and hours on street and community projects, especially with children in slum neighborhoods where no government-backed artist wants to invest their time, the ones who have lost many projects and festivals because of the Cuban government, the artists who touch the most sensitive fibers of the Cuban people’s being, a people who have been molded to death; these artists, the avant-garde, are taking it upon themselves to carry the moral burden of an entire nation and whoever isn’t brave enough to support them should at least be brave enough to give them the respect they deserve.

It’s easy to understand how some people thought that man’s exploitation of his fellow man had an expiry date when the Revolution’s socialist nature was proclaimed, but after nearly 60 years, it’s unacceptable that the government insists on adjudicating the right to tell Cubans what Art should be and how it should be properly expressed, like a feudal lord, because they think it’s “for everyone’s wellbeing”, when the truth speaks for itself when it is free to do so, and we as artists of our time cling onto this freedom.

Government leaders are making a huge mistake by trying to convert artists into programmed robots who work for Communism. Wanting them to be knocked out zombies on stretchers in a castle basement, a castle where a general rules and oppresses his people who are as noble as our own, is absolute thick-headedness.

Now is the time that we can’t remain silent while they trample all over our right to participate freely in art as dignified human beings with all of the guarantees that we have been recognized internationally and elsewhere.

Without wanting to offend anyone, and with the tacit intention of making people refllect, becoming aware of the real difference between oppressors and their lackeys, and everyone who is being oppressed, aware that this is the most just of causes, and that victory will come sooner or later. For the good of our country, I hope that everyone who feels offended understands the mistake they are committing and that they manage to put things right by taking their place alongside justice and decency.

Decree-Law 349 is being used to suppress Art, indoctrinate artists, sell the image of a stylized culture according to the criteria of an ideology that has been proven to fail time and time again, because it is incompatible with human nature more than anything else, without bearing in mind the fact that Art is one of the essential things that makes us different from animals; Art allows us to express ourselves in ways that go beyond means, resources, form and traditions a lot of the time. It makes us unique, it defines us, it emphasizes who we are as individuals, independent within this whole that is society, civilization.

Repression, censorship, violence against artists, is the reflection of incompetence, of fear and insecurities of a regime that is corrupt and incapable of governing the country without resorting to oppression and the use of violence. And now that artists have decided to take action, dark days are expected to lie ahead for Art, creation and culture. This, especially because wickedness is the only thing that the Cuban government knows and everybody knows that an old dog doesn’t learn any new tricks. Luckily, there’s always light at the end of the dark tunnel.

It is absolutely absurd to want human beings to all be the same, for them to think the same and work together, or separately, for the same and only end. Conditions that determine ideologies aren’t always the same when people are involved, and every circumstance and singularity needs to be kept in mind so as not to commit excess and atrocities. Today, the Cuban government is loyal to the truism that there is an opportunist behind every extremist.

I understand that some “recognized” artists don’t feel too comfortable with other “less recognized” or “less trained” artists taking applause and, in passing, money. But, what would happen to all the foreigners who come from all over the world just to see this army of old men who tirelessly fill spaces with so much traditional music, or all of the painters and sculptors who sell their art in alternative spaces for the price of a sick chicken so they can feed their children or mothers.

The Cuban government must be amazed that people still want to make art, homeland and freedom in Cuba, and are willing to defend their dreams and goals with everything they have. To this government that is trying to turn so many dreams into nightmares, we say: While evil, hate and hypocrisy continue to reign at Revolution Palace, know that if they need us for anything (and they know they depend on us), that they can’t count on us for anything.

One thought on “And Here Comes Another Migraine…”