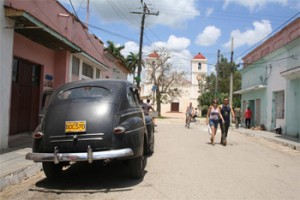 HAVANA TIMES – I have always had a soft spot for Australians who come here to visit us. Maybe it’s because they come from a highly developed country and like anywhere else in the world, live on their salaries.

And then there’s the fact that Australia is at the other end of the globe and its one long haul to get here, crossing the half planet to reach our little island.

Childhood memories still bind me to this great island continent, seventy times the size of ours.

When I was young we had a little library-room in our house and I’d gaze at the big map of Australia my father got from the National Geographic Magazine. He used to sell them when he was working in a Shell station. That was down in Guanabo, just about at the end, of that lovely line of beaches that runs along the coast of East Havana.

As a boy I’d day-dream about a little town. Alice Springs it was called, located right in the center somewhere of the immense Australia. Apparently it has a mere 25,000 inhabitants and some pretty nice tourist sites.

Imagine my surprise on meeting an elderly couple from the place. I started by answering questions but ended up asking the Australians about all sorts of things: the aborigines, the desert, the diamond mines, and all sorts of other exotica, the sort of thing you read about in the press.

It was much to my surprise when they started asking me questions about Cuba I realized Cuba was an equally weird place in their eyes.

The difference, however, was that our peculiarities had no relationship with tropical nature as they do in Australia. The Tropic of Capricorn cuts across it, that says enough. All of the doubts and questions they had were about the social-political scene here. 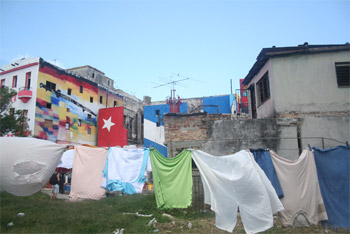 What will happen when El Commandante dies?. Do you feel comfortable with Socialism or do you prefer Capitalism? Do Americans come to visit? Why do you have two currencies? How much do you get paid? And where is Cuba headed?

The answers, I told them, would vary from person to person; and although there are marked tendencies there is no unanimous agreement. Apart of course, from straight forward requests for information.

With that said, we spent an afternoon in the park of the Plaza de Armas, surrounded by second hand books and rare prints, carefully collected by astute Cuban vendors to captivate the interest of their foreign customers.

Given their advanced age and the climate, hot and humid, the Australians didn’t walk much, making my job all the easier. I wanted to be courteous and offer them a nice snack but that desire was thwarted by what the street vendors had to offer.

The Australians weren’t interested in soft drinks in cans and they didn’t drink alcohol. But they were especially disappointed by the lack of the natural juices the highly reputed “Lonely Planet.” said are available to all and sundry on this “Tropical Island”.

After so many questions they finally got round to “The Cuban Five” a complex issue when it comes to English culture. I gave them a long explanation. Maybe it wasn’t so comprehensible or something because although they understood the issue of subversion against communism, supported from Miami, they thought that the “The Five” had been captured as spies in foreign territory, in a country technically at war with them.

It was impossible to avoid the subject so I was obliged to fill them in on the history of Cuba and its relations with the United States, especially the Cuban exiles’ use of violent means in breach of U.S. law, the use of terrorism in other words, to combat a system they didn’t agree with.

As visitors, the Australians ultimately appreciated the dangers of the terrorist attacks that had been carried out in various tourist centers in Cuba.

Not unexpectedly we parted on good terms. English culture, after all, is framed in a liberal tradition that allowed men like Karl Marx and José Martí to live most of their life in England or the United States, despite in both cases being keen critics of the socio-economic and political reality of those two countries. 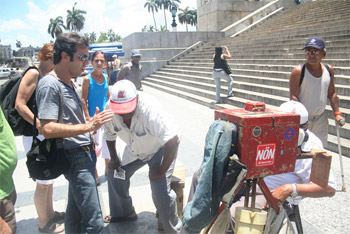 My friends from the island-continent then went off on a visit to the interior, returning days later. I bumped into them quite by chance. It was at a stop of the tourist bus that tours the city all day long. I was in a long queue waiting to get into the post office, the Correos de Cuba, where most Cubans regularly go to check their emails.

Regarding their first query, logical at the time, I gave them a straight answer: no, we don’t have total access to the Internet, but can exchange emails, using the home page but without the option of sending or downloading files, nor are we allowed to surf the web. Payment is in convertible currency at the rate of CUC 1.50 an hour, equivalent to $ 1.65 U.S. dollars.

Put out by something so seemingly unnatural in the modern world, they wanted to depart with a joke to ease the sense of unease aroused by the exchange.

“By the way friend, in Cienfuegos we found the public baths were closed off. Why was that? …”

Fortunately the bus appeared with its two big windshields at the front, and I quickly said goodbye, alleging I could lose my turn after spending so much time in the queue. They went upstairs on the double-decker guagua as we call the bus here, and enjoying the fresh air, they waved goodbye as cameras captured the moment.
—–
Vincente Morin Aguado: [email protected]

10 thoughts on “Aussies in Cuba, a Long Way from Home”