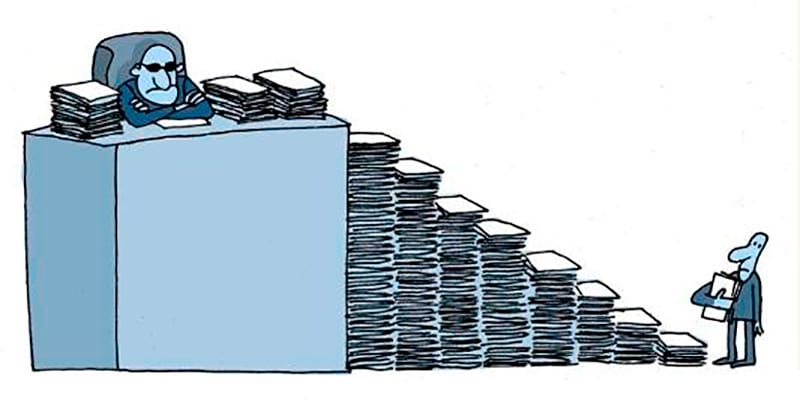 These are personages spread throughout public offices such as the housing and water departments, immigration and others. With some we come face to face and can tell them a thing or two, but those who cause us the most problems only give orders and remain behind the scene.

Bureaucracy isn’t exclusive to the Stalinist model but it has apt conditions for its extension because all means of production, even stands selling fritters, are in the hands of the state which needs to create a gigantic apparatus to control the economy.

Later, bureaucracy takes on its own life, as Jose Marti warned, and it is imperative because it has created so many absurd procedures that hundreds of thousands of office workers are needed to fill out forms and issuing certificates requested by other office workers.

I recently witnessed the sale of an old car from one foreign company to another and it made me laugh. First, the two companies had to submit to the Chamber of Commerce all documentation that accredits them to operate in Cuba.

This was the first useless formality because the two companies have offices on the island and therefore the Chamber of Commerce already has all those documents in their files. With the authorization of this office they went to a notary to make arrangements for the sale.

There they were met with a big surprise; the notary informed them that the presence of the owners of the two companies is essential to carry out the transaction. So it was necessary to coordinate the trips to Cuba of one owner from Spain and the other from Canada, so they could coincide in Havana at the same time.

It wasn’t about selling a luxury car or a classic but a 10-year-old work vehicle of Romanian origin, with 160 thousand kilometers traveled. A car that in Cuba is worth twice what it cost when purchased new.

In another area, for immigration procedures a number of recent documents are requested, such as one that verifies marital status or one’s Police record. It seems logical that these need to be recent because the person’s status may have changed.

However, they also ask for a birth certificate with a maximum of 6 months of being issued and one wonders why is one issued a year or two ago not sufficient? At the end of the day the place, day and time in which we were born cannot be changed by us or any authority.

But the worst of bureaucracy is that it is a contagious disease to which we are all exposed even if our power is very limited. It imprints its “reasoning” on us and we begin repeating absurdities as if we were robots.

Now, for example, to be a member of the Canary Islands Cultural Society in Pinar del Río it is no longer enough to show a Spanish passport, registration at the consulate or a birth certificate that was used to obtain citizenship as a legacy of his/her grandfather.

The “authorities” of the Canary Society, copying immigration, require a birth certificate issued less than six months ago, which the grandchildren of immigrants have to return to get certified in Spain.

Is it that we all carry a small bureaucrat inside? Is it that power, however limited it may be, transforms us? Is it a virus that is waiting to manifest itself at the slightest chance? Is it that we retaliate against others for what’s done to us?

In any case, there are two types of bureaucrats, those above and those below. With the first, there is no basis for resolving the problem because they defend their economic privileges. But those below are we making life very difficult for others.

Making things unnecessarily complicated and slow to obtain money in exchange for speeding up the process is a vicious circle in which the money that enters from one side is lost on the other, when the small bureaucrat needs to do their own paperwork.

The nation can be better and that does not depend solely on the changes made by the government, it also has to do with personal choice. Ultimately it is acting as a brother/sister to others or as a predator.

5 thoughts on “Bureaucracy in Cuba as a Contagious Disease”