HAVANA TIMES — The Dominican Republic’s Constitutional Court’s recent xenophobic and discriminatory decision of depriving thousands of Haitian-born immigrants of their Dominican nationality had a collateral upside to it: that of gathering the most valuable members of Dominican society – intellectuals, activists and common citizens – in a single resistance front.

Bravely, these individuals and organizations have publicly condemned the ultra-nationalist sectors of the country’s most reactionary Right and have confronted the fascist-like threats (including calls for their death and ostracism) with the utmost dignity.

All of this is admirable. I must confess, however, that when I look upon my other condition, my Cuban nationality, I feel profound sadness, and this because the majority of these individuals – not unlike the majority within the democratic and Left end of the political spectrum in the DR – has never stopped to consider that the reprehensible denationalization planned by the Dominican government is child’s play compared to the massive expropriation of citizen rights that the Cuban government has practiced with its émigrés for years.

Over one million Cubans have left their country over the last fifty years. Their departures have been traumatic, many a time involving reprisals from aggressive mobs, the loss of jobs, the expropriation of their modest personal belongings and the rifting-apart of families.

These people have lost their right to reside on the island, to own property there and even to visit the country freely. Thousands of Cubans have been denied the right to visit the place of their birth, even when faced with tragic family circumstances, such that many parents and sons and daughters have had no other option than to imagine their final goodbyes in the distance.

Cuban émigrés pay the most expensive consular services in the world, fees which, in conjunction with the remittances which allow many Cubans to get by, are an important source of revenue for Cuba’s governing bureaucracy.

Even the island’s recent migratory reforms leave intact the line of separation between the nation and its émigrés, that is to say, between that part of Cuba’s population residing on the island and the other, one of the most successful diasporas in the world.

Cuban émigrés continue to be deprived of their citizenship rights in the country of their birth and continue to depend on government authorization to be able to visit Cuba.

There is, of course, a difference between expropriated Dominicans and Cubans who are divested of their rights. The former, for the most part poor, remain imprisoned within the half-island. Cubans, who are generally more qualified, enter a new society with an advantageous position and in one way or another manage to succeed. 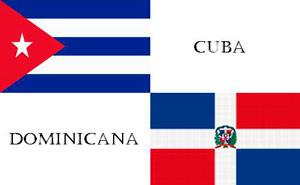 In the United States, they enjoy legal benefits thanks to a law that favors them. I would say, however, that these are merely circumstantial differences which are insignificant against the backdrop of the monstrous way in which citizens are deprived of their rights and denaturalized. In this sense, the crime perpetrated by the two governments is equally perverse and, as such, equally reprehensible.

The reasons behind the moral hemiplegia of those who condemn one practice and support – or simply remain silent about the other – is to be found in complicity.

In some cases, we are dealing with shameless and opportunistic complicity, the complicity of those who wish to be associated with the Left simply because that secures them benefits they would be unable to have elsewhere, either for lack of talent or because of sheer idleness.

Tiny political factions allied to the government, foundations that depend on public funds or splinter left-wing organizations that continue to thrive within State structures are eloquent examples of this unredeemable segment of the Dominican Republic’s political fauna. They are beyond hope: the swamps of politics are their natural habitat.

In other cases, we are witness to a sympathetic kind of complicity which seeks nothing other than spiritual tranquility and co-existence with a nostalgic discourse which speaks of a revolution and an anti-imperialist resistance on which they may have once laid their hopes.

When they hear talk of Cuba, they cross their fingers, but, in fact, they have never seriously considered the idea of living under the regime they tolerate – and even praise – from a distance.

Curiously enough, they would also never have been willing to tolerate what takes place in Cuba in their own country.

Putting aside the issue of émigrés for the moment, when I saw the obscene nationalist rally organized in Parque Independencia on Dominican television, I could not avoid noticing its similarity to the type of aggression that Cuban dissidents suffer every day at the hands of government-spurred mobs, whose methods and harangues are as fascist as the ones I heard that Monday and who, in addition, can use physical violence against their adversaries with impunity. And they do.

It is thus comprehensible that, in the words of Minister Gustavo Montalvo, spoken during a visit to Havana, Cuban leaders “showed understanding towards the position exposed by the Dominican government.” It couldn’t be any other way.

The confluence of sympathy and opportunism has opened the doors of Dominican academic and political spaces to detestable figures who have been responsible for shameful acts of repression and coercion aimed at Cuban intellectuals.

Cuban society certainly deserves this.
—–
(*) Haroldo Dilla is a Cuban sociologist and historian living in the Dominican Republic.

One thought on “Cuba and the Dominican Left”