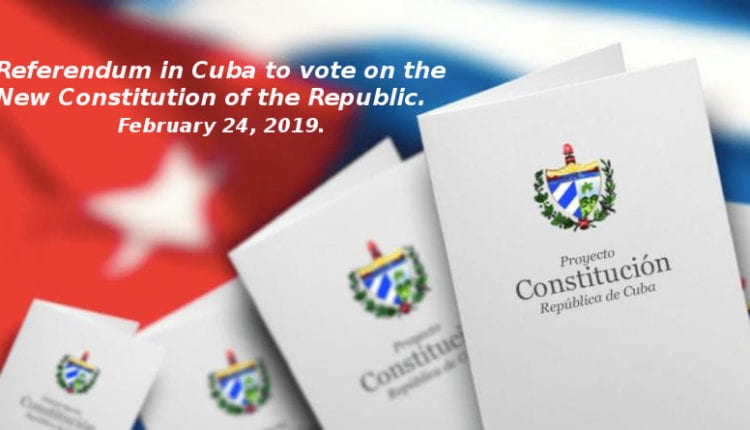 HAVANA TIMES – In a little less than 40 days Cubans will be voting on the constitutional referendum that is being debated throughout the country and on social networks — an authentic and silent duel pitting those who will vote Yes and those who favor the No.

Cuban television, meanwhile, has staged a campaign as intense as we’ve ever seen on the Island. For example, during the baseball finals between Villa Clara and Las Tunas, there were constant reminders during the ballgame urging voters to vote yes. Even after an almost perfect play made by the third baseman, the narrator calling the game, and almost in the same breath, told fans watching that he was voting yes.

Even during interviews on the field or in the stands the idea of a Yes vote was prevalent. Although… I noticed that by the second game of the series the fever pitch for the Yes vote had been toned down — probably some advisor advising that they may be going a bit overboard on the issue.

The Cuban Revolution is banking heavily on the final results of the February 24 referendum. According to many, this Magna Carta is quite complete after months of intense citizen participation and input. But an immeasurable part of the citizenry, as well as the enemies and sworn adversaries of the Cuban government, advocate for a No vote, which might lead to its failure at the polls. [No voices advocating a No vote in the referendum are given space in the government controlled Cuban media.]

Another aspect of the vote that must be taken into account (because it has nothing to do with “enemy activity”) is the degree of dissatisfaction evident in almost all sectors of the population. It is a feeling that could influence at the time of counting the votes.

In other parts of the world, it is referred to as a “punishment vote.” Difficulties not yet solved with the availability of food, low wages, poor transportation, lack of housing, high prices, erroneous tax policies and even the prolonged scarcity of some medicines could turn a regular citizen into a No voter without consideration of what he or she is voting for, which, in my opinion, is the future made possible by a Magna Carta for our children and grandchildren.

I can’t help but remember Fidel Castro’s own words — many years ago now — when he said that under certain circumstances there was dissatisfaction with the Revolution, but not opposition to it. This may be a deja vu situation.

The vote on February 24 will be a case of political maturity. And if a friend were to ask me how I will vote, I would answer, “Yes, without a doubt.” It is convenient to keep a roof over the house so that no internal or external storms can impede us. And as the poet once said: create our own path.

One thought on “Cuba, Referendum: Vote YES versus the Vote NO”