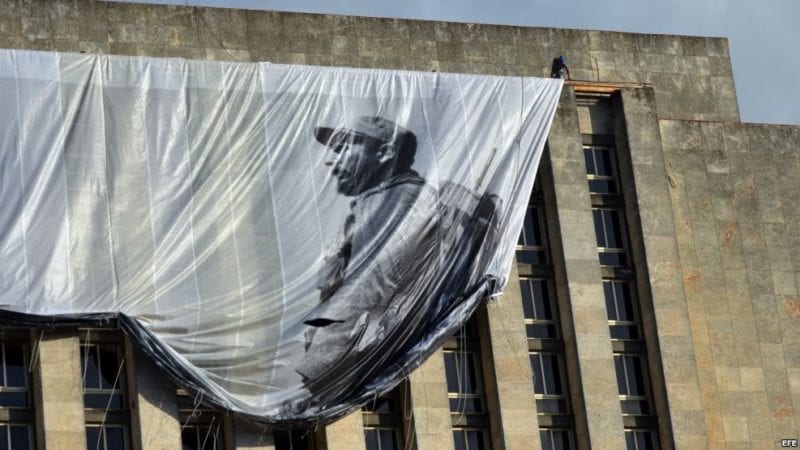 HAVANA TIMES — The things you can read and hear these days overstep absolute craziness and border on the edge of a story that no human mind could have conjured, even if it were losing all of its screws.

Nine days of mourning in Cuba, where some ashes are being moved around so that millions of people can worship them religiously while they’re being watched to make sure that they comply with the strict “grieving” guidelines that have been imposed by the system.

For example, not being able to play music, sing, laugh, express happiness, satisfaction or celebrate. Radio and TV presenters have even had the hint to not start their programs with “good morning” as it is assumed that these nine days won’t hold anything “good” for anybody, according to what folk singer Silvio Rodriguez blurted out to a journalist.

Nothing similar was seen even when North Korea’s Kim II Sun died, however, as well as the sad, melancholic and bitter tour, funeral honors will end with Fidel’s burial, well not of his body but of his ashes. Another completely crazy idea, seemingly harmless, but maybe there to measure the extent to which nothing that has been planned has any kind of contact with reason.

Raul and his oligarch entourage set off a trial balloon to sample the level of acceptance to put a mention to his great brother between the words Republic and Cuba, so that Cuba becomes the Fidelian Republic of Cuba or something like that.

It seems that we can expect anything, and if the trial balloon advances favorably they might even dare to put the words republic and cuba in small letters and only put Fidelian in capital letters, or they might even dare to put forward the idea that as the island didn’t have a name once upon a time and the word “Cuba” was given by “Colonial European Imperialism” then they might as well start from scratch with this naming business and just call the island the Fidelian Republic, or even “Fidelic”.

Even though we can dig deeper, we can deduce the fact that if Raul sees that Cuban people are accepting of the trial balloon, and with the help of his repressive apparatus and the sheep-like nature of the population that has already been stupefied, the most likely thing to happen is that this will all be accepted with rounds of applause and fiery speeches, and he’ll most likely end up naming the country “The Kastromasov (and descendants) Kingdom”.

2 thoughts on “Cuba: The Absurd of the Absurd”