HAVANA TIMES — On October 29, the resolution titled “The Need to Put an End to the Economic, Commercial and Financial Blockade Imposed on Cuba by the United States of America” will be subjected to a voting process at the UN General Assembly.

Though Cuba has submitted this resolution on 21 previous occasions and has secured nearly unanimous support from the Assembly’s member states, the blockade remains in place and as intransigent as ever.

In its introduction, the report Cuba has submitted to the General Assembly for the purposes of illustrating the situation created by this unilateral measure against the island states the following:

“Its declared aim, the political, legal and administrative framework that sustains it, make the blockade an act of genocide under the Convention for the Prevention and Sanction of the Crime of Genocide of 1948, as well as an act of economic war, in conformity with the declaration related to maritime warfare adopted by the 1909 London Naval Conference. The blockade imposed on Cuba is the most unjust, severe and protracted series of unilateral sanctions that has ever been applied on any one country.

“As a result of the strict and aggressive application of the laws and norms that comprise the blockade, Cuba continues to be denied the right to freely export and import products and services to and from the United States, to use the United States dollar in its international financial transactions or to hold bank accounts in this currency in the banks of third countries. Cuba is also denied access to loans issued by US banks, its branches in third countries and international financial institutions such as the World Bank, the International Monetary Fund (IMF) or the Inter-American Development Bank (IDB).” 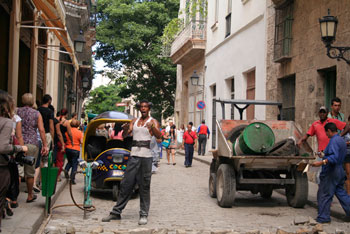 The notorious enemies of the Cuban revolution, most of them paid by the United States, do not get tired of insisting that Cuba uses the blockade as a pretext to conceal the inefficiency of its system. However, none of them advocates depriving Cuba of this pretext so that the whole world can see just how inefficient Cuban socialism is.

I won’t quote many figures, I will limit myself to pointing out that, in the course of more than fifty years of blockade, Cuba has lost more than a trillion dollars. The most irritating thing of all, that which makes the blockade even more ethically and morally reprehensible, is the fact Cuba is denied the possibility of purchasing medication and medical equipment needed to save lives (particularly children with cancer) from the United States, that it is forced to use intermediaries in order to acquire them, in transactions that are more costly and slower, to the detriment of the health of these individuals.

That fact alone could well be considered an act of genocide, which is punishable under international humanitarian law.

In addition, blockade measures and prohibitions deprive the people of the United States themselves of the possibility of acquiring medications produced exclusively by Cuba, such as Heberprot-P, which can be used to prevent the amputation of diabetic feet, and other drugs developed by Cuba’s biotechnology industry which could save many lives.

I have mentioned only a miniscule part of the consequences of the blockade imposed on Cuba, which affects all of the country’s sectors, as Cuba is an underdeveloped country without large reserves of natural resources with which it can cover excessive costs.

That said, Cuba struggles to develop against all odds and very much in spite of those who delude themselves that the Cuban revolution will give in to the United States’ economic pressures.

As everyone knows, the declared aim of the blockade is to bring about so much hunger, disease and despair among Cubans that the people will revolt against the revolutionary government. The Cuban people, however, aren’t stupid and know perfectly well who is responsible for their plight.

In addition to the blockade, the United States has made use (through the CIA) of all kinds of aggression, including terrorist attacks which have caused the deaths of thousands of people, as well as the introduction of hemorrhagic dengue fever, which caused the deaths of more than one hundred children and hundreds of adults.

It has introduced African porcine fever (which decimated the country’s pig population and forced the livestock industry to start production from scratch), and different plagues aimed at destroying harvests, citrus, sugar cane and tobacco plantations – In short, it has done everything in its power to fulfill its aims. The one thing it didn’t count on was the Cuban people’s spirit of resistance and its fidelity to the revolution, which will not give in to any kind of blockade.

12 thoughts on “Cuba Will Not Give In to Any Blockade”