“If they’d told me in Cuba of the crisis going on in this country, I would have stayed there.” -Cuban dissident now living in Spain 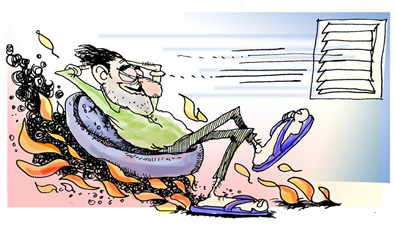 HAVANA TIMES – Life must be improving in hell. I know for a fact that some places there have air-conditioning.

I am not trying to make light of the situation currently faced by more than 100 Cuban dissidents, and their families, who in 2010 were transplanted to Spain after the European nation negotiated their freedom from prison.

But there’s a point to be made. Especially when one considers that in Miami live so many, for example, who espouse a daily litany that Cuba is a living hell.

Now it turns out that this Caribbean Hades beats living in Spain, a country mired in such a lousy economy that it makes Dante’s Inferno look tame. Especially if you’re not one of the 1 percent made famous by the Occupy Wall Street movement.

I wish for a solution. I hate to see people suffer needlessly. Especially when there are children involved. And in the case of the dissidents in Spain there are many children and other family members in dire straits. Many of them without money, food and shelter.

And now some are asking to be returned to Cuba, which, according to my compatriots here in Miami, is the equivalent of hell.

And contemplate: Quick questions and thoughts come to mind:

(Fifty million dollars spread out over five years in monthly checks to 700 Cubans breaks down to approximately 1,200 a month each.)

I am sure you the reader can come up with a few more of these questions.

The fact is that Cuba has its problems. Many of them. But it’s not the living hell some would like you to think it is. And backed by mostly U.S. dollars (tax dollars!), there’s an ongoing, 50-plus-year campaign to demonize anything that smacks of Cuba and its system. The traditional press has helped to sustain it.

And those 700-plus human beings now stuck in Spain with nowhere to go are simply collateral damage. The empire’s paid employees propelling this war of lies and half-truths. They feel compelled to use these persons, and then discard them when they no longer serve a propagandistic purpose.

So to answer my own question: The reason little interest is demonstrated for the Cuban dissidents in Spain is because they are no longer of use. They served their purpose a few years back. Now, as far as many are concerned, the less we hear of them… the better.
—–
For a related article in Progreso Weekly, see: Out on the street

9 thoughts on “Cuba/Dissidents: Air-conditioning in hell”