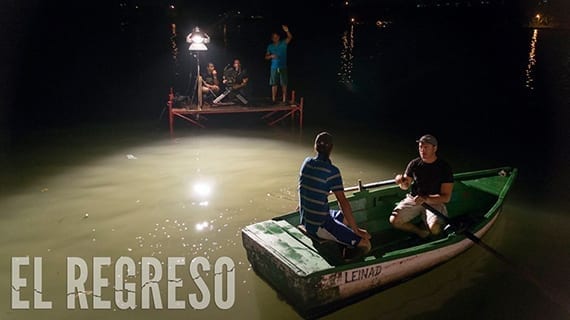 HAVANA TIMES – Even though the Havana Film Festival ended on December 16th, you can still see lines outside Havana’s movie theaters. This is because El Regreso (The Return), the directorial debut by Cuban actress Blanca Rosa Blanco, is being premiered. The film was also screened during the Festival.

In her debut as a director, Blanca Rosa Blanco is an all-rounder, as she not only wrote the screenplay and directed the movie (alongside the experienced Alberto Luberta), she also played the lead role.

The synopsis of El Regreso is quite enticing: a detective (Blanca Rosa) is obsessed with a case in which a man she always believed to be innocent (Osvaldo Doimeadios) is put away behind bars. In order to try and reopen the case and prove the prime suspect’s guilt (Rafael Lahera), the protagonist returns to his hometown of Matanzas.

Detective movies attract a large audience, and a good story, as well as a good cast (made up by Yadier Fernandez, Yazmin Gomez, Yaite Ruiz and Carlos Enrique Almirante, along with special appearances by Veronica Lyn, Jorge Martinez and the abovementioned Doimeadios) are all key elements to entertain an audience. This was Blanco’s main objective, according to what she said in a TV interview.

I could say that she was successful in doing this, as El Regreso is entertaining and the audience goes away happy. In my personal opinion, because I’m a huge fan of detective movies, I missed the much-needed suspense for a film to draw me in from the beginning to the end. The movie becomes predictable half-way through and there are several moments when I felt like I was having dejavu: I’ve already seen it, I’ve already seen it, but better made.

It’s one of the dangers of filming a detective movie: so many really good ones have already been made. Repeating solutions can become an unconscious, inevitable act. Worse still, some solutions in this movie weren’t very believable and seemed to have been a trick up the director’s sleeve, like the second gun that our daring detective flaunts.

Taking too much on in her first movie as a director also works against the director/screenwriter/protagonist. Her performance in front of the camera shows the skill that has established her as one of the best Cuban actresses over recent decades, although this isn’t one of the most demanding roles she has taken on.

Rafael Lahera puts everything into his character and responds to the script’s demands. El Regreso also belongs to this magnificent actor, who we haven’t seen on the large screen in recent years. Yazmin Gomez’s performance is convincing like we have come to expect.

In spite of the discontent I had with this movie, I thank Blanca for making her debut as a director with an entertaining genre that doesn’t really appear in Cuban cinema. Therefore, she can be very happy with the fact that most people liked her movie.