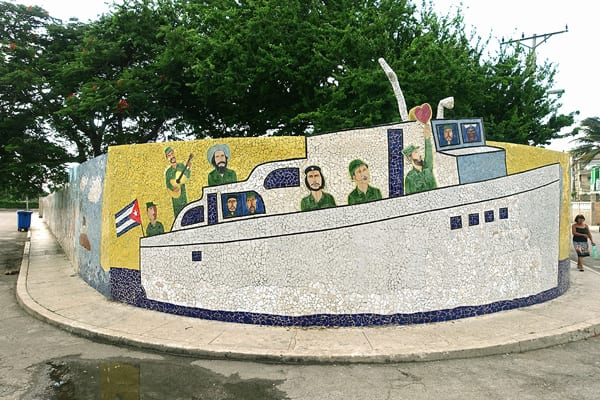 HAVANA TIMES — I came to write this piece because I was fascinated reading the Lonely Planet’s account of Cuban history. Wanting to share it, I summarized it. Yet I realized that something vital was missing from the Lonely Planet, namely a summing up of Cuba as it is now.

The last part of this piece cannot fill that gap. Rather, it is a personal reflection of someone born in a communist country who has travelled to Cuba and attempted to understand it. Cuba felt like stepping inside an anachronism, a living museum of communism. It is also a complex, paradoxical, fascinating and friendly island.

Obviously, these thoughts reflect my biases, though I did rethink my attitudes on Che and Castro while in Cuba. Here, these two are regarded as saints who could do no wrong, whereas in the West they are generally seen as violent apostles of a bankrupt ideology. Setting moral judgments aside, I tried to evaluate what the revolutionaries created, as well as the negatives.

On the plus side, one can cite the removal of a brutal dictator, the achievements in medical care and education, plus the elimination of extreme poverty. The minus side is that Cuba is stuck in the past.

Yet even the much vaunted achievements of Cuban communism can be doubted. Cuban medicine is hamstrung by lack of modern technology and a shortage of drugs. Education is free; including university, but strong ideological content is present, with the constitution stating that educational and cultural policy is based on Marxist ideology. While literacy is extremely high, there is little worth reading available. 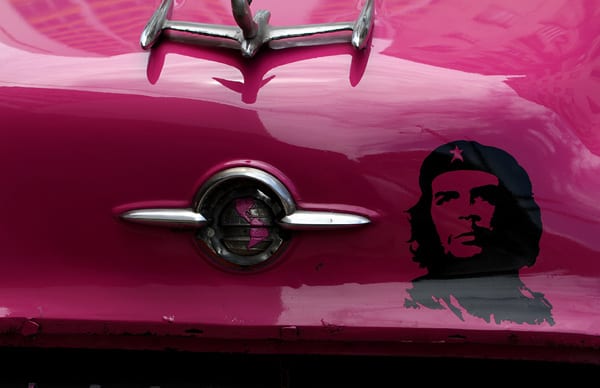 As for housing, much of it is very basic, not to mention falling apart. Overall, Cuba is one of the poorest countries in the region. Politically, intellectually and materially it lags way behind the more advanced Latin American countries, such as Chile and Costa Rica.

So are the Cubans better off because of Castro? Fifty years ago, he did a lot of good by removing a tyrant and eradicating extremes of poverty, but now in the 21st century, it seems that Cuba would be in better shape without communism.

Before the revolution, Castro took autocratic control of the rebel organization, MR-26-7, with some dissenters labeling him a caudillo (dictator). He argued that a successful revolution could not be run by committee and required a strong leader. He has maintained that level of control. To outsiders, it may seem that Cuba is Castro’s personal fiefdom, yet the Comandante seems to be popular. Of course, it is impossible to know the real state of public opinion when there is no way for it to be expressed or measured, given the lack of political freedom. A roadside slogan reads, “Fidel is Cuba”, and indeed few Cubans can picture Cuba without Fidel and his brother. What ordinary Cubans want is not political freedom but a higher standard of living.

As in other countries where all power is concentrated in a single organ (ie the Party), Cubans lack certain basic human rights. The world’s two most respected human rights bodies regularly berate the government for its refusal to respect the rights of assembly, association and expression. In 2008 Cuba had the second-highest number of imprisoned journalists of any nation (China had the highest). When the Cubans speak of Cuba libre they don’t mean free in the usual sense, but free of foreign domination. People fear to speak openly about politics and can only read what the government wants them to read. They may be free from foreign interference, but not from the interference of the ever-present Party, with its thousands of local Committees for the Defense of the Revolution, whose role is in large part to monitor and report dissent.

It seems to me that social engineering inevitably entails the suppression of dissent. One cannot impose a socialist model and allow democracy at the same time. Nor does Castro allow boats. The Cuban shoreline is eerily empty because Cubans are not allowed to own boats in case they attempt to cross to Florida. 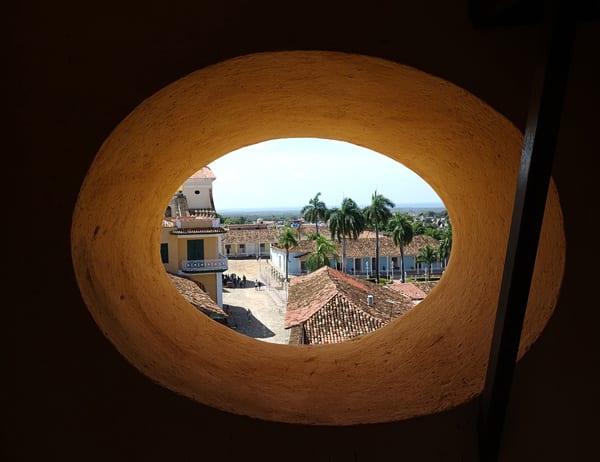 The philosopher-historian, Arnold Toynbee, wrote that fascism is the attempt to live in the past, and that communism is the attempt to live in the future. He believed a society progresses when human creativity is brought to bear on the problems of the present. To do this, freedom is needed. In Cuba freedom is a limited commodity, not just for the average Cuban, but also for those who steer the ship.

The Castro brothers are shackled to the ideas of a 19th century philosopher called Karl Marx. Marx did not live to see his ideas put into practice. Undoubtedly, he would have been horrified by the crimes of Stalin, Mao and Pol Pot. What he would have thought of Fidel and Cuba is an interesting question. Would Marx even be a Marxist if he lived now?

A favorite revolutionary slogan here is Che’s “Hasta la victoria siempre!” (Always till victory!) It reminds me of the ironic Polish saying from communist times, “Communism is on the horizon”, meaning that it is never reached. I also recall someone saying that if the Spanish language lacked a future tense then Castro would have to shut up. It confirms Toynbee’s view that the communist mind-set means perpetually living in the future.

Yet paradoxically, the Castros are also living in the past. Revolution means rapid and radical change. Fidel continually urges Cubans to preserve and defend the Revolution. Of course, it is not possible to capture or preserve change, let alone enshrine it in an institution, such as the Party. A revolution that happened half a century ago is no longer a revolution but a relic. What he really means is that he wants to protect and perpetuate the communist system, in other words, the status quo. Thus he is a rigid conservative posing as a revolutionary. The last thing he wants in Cuba is another revolution.

It is said, only half in jest, that the measure of the greatness of a scientist is how long they hold up progress in their chosen field. If we apply this metric to politics then Castro is without a peer.

Another paradox is that Fidel himself has undermined socialism. Two currencies now circulate in Cuba, one for foreigners, the other for the locals. At any rate, that is the intention. The problem is that only a few basics can be purchased using the local peso. The two-tier price system and the influx of tourists, who are wealthy by Cuban standards, has distorted the largely classless post-revolution society. Absurdly, taxi drivers now earn more than doctors. The fare from the airport to Havana is equivalent to a high monthly salary. Simply because they receive tips from Westerners, people working in the tourist industry are far better off than others. They are the new upper class. For instance, a waiter in Verdadero can earn the equivalent of a monthly salary in a single day, just from tips.

Peter Millar writes that among the Cubans “… it has been widely accepted that it is better for some people to have nice things than for nobody to have anything. At least this way there is a chance for a trickle down, rather than stagnation and starvation.”

Cuba is a fertile country with abundant rainfall, yet its agriculture is so inefficient that it is unable to feed itself. Eighty percent of its food was imported in 2008. Consequently, Cuba has resorted to tourism which, since 1995, is the number one industry. Tourism in Cuba is growing faster than in any other country in the world, and it is expected that if the embargo is ended a million Americans will visit in the first year. 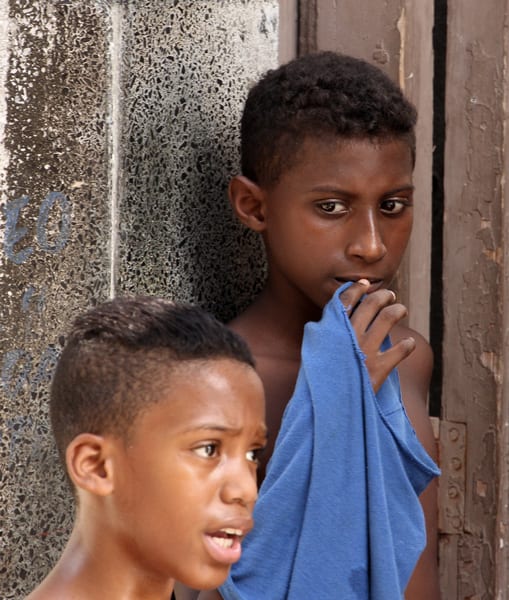 Tourists come to Cuba to view the relics of its colonial past and for its beaches. Few come because they want to know the man whose image sold a million T-shirts, or out of curiosity about social engineering. It is a paradox that Western tourism is keeping communism alive, yet the tourists are not here because of their interest in communism; indeed they want no part of it for themselves.

Cuba exhibits the staples of communism – shortages, empty shops, queues, artificial prices, things not working, and a low standard of living (except for the select few). The libreta, a complex and bureaucratic system of rationing, was introduced in 1962 by Che as a temporary palliative to a crisis, and has lasted for more than fifty years. As in communist Poland, most people struggle just to get by. Women ask tourists for soap in the street. Of course, there is a positive side too – medicine, education and housing are free for all, and basic foods are highly subsidized through the libreta.

By contrast, the US is a free country with a high standard of living where things work and shops are over-stocked. Yet in the US medicine, education and housing are expensive, and there is a whole under-class that cannot afford these basics. In Cuba, things are pretty much the reverse.

In terms of Jungian psychology, Cuba is the US’s shadow, ie the disowned part the US does not want to see and pretends does not exist, although it is right next door. For all its faults, the Cuban system can prick the US conscience because it embodies the notion that every person matters and should be provided with the basics of life, regardless of the cost of this to the state.

For the Cubans, the US epitomizes the Other, ie what is foreign and dangerous, yet at the same time attractive. There is the siren call of pursuing material riches untrammelled by notions of social responsibility.

It may suit Castro to have the Yankee bogeyman just 150 km away across the Straits of Florida. It helps unite the country and makes his warnings to defend the Revolution more credible. Also, many of the shortages can be (justifiably) blamed on the embargo.

Actually, Uncle Sam is not glowering across the water but is squatting right on Cuban soil. Guantanamo Bay seems like a weird aberration. I used to wonder why Castro allows the US to keep a base there. The answer is simple enough. The US soldiers are there and Castro lacks the military clout to expel them.

Cuba is an oxymoron – a frozen revolution. Yet since the fall of the USSR, it has begun to thaw. Having lurched all the way to the left fifty years ago, it seems the only way for it to emerge out of stasis was to move towards the center. Only by allowing more capitalism, with the inequalities it engenders, can the living standard of ordinary Cubans be raised. This is the uncomfortable truth the Castros are struggling with.