HAVANA TIMES — A few days ago, my next door neighbor knocked on my door and asked me if I didn’t mind having a flask of rum with him, “or I’m going to explode”, he said. It was 3pm in the afternoon. We sat in the living room, and even though I’d switched on both of my fixed fans, the only air that they’re rotating blades blew out was hot. If was as if the temperature was warning me of what was to come.

The first confession was direct and straight to the point. The Head teacher of the primary school where his youngest son studied had sent him a message asking him to go and see her urgently, that she’d be waiting for him in the head teacher’s office. “Up until that point, everything was normal, some prank, you know what kids are like. The earthquake came afterwards,” and he took a gulpful of rum suddenly. And then another.

He continued to drink, the space between each swig becoming shorter and shorter. Maybe he wanted to get rid of something that resembled anguish or despair. All of a sudden, he said, I saw myself going into the head teacher’s office. She was sitting impatiently behind a desk and my son was waiting, sat down with his head lowered, for me, his father, to come and rescue him from his punishment.

School can sometimes be like a jail cell, don’t you think? It’s also a factory where they produce boys and girls on an industrial line, turning children into parrots of the government’s ideology, I wanted to say to him, but I remained silent.

Ah, the slogan of so many years of the Cuban Revolution: Pioneers of Communism, we will be like Che. “The Head teacher, very serious, told me that I should take him to a psychiatrist that my son suffered from some kind of personality disorder.” 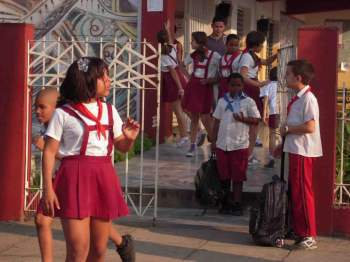 And what did you tell her? “That my eldest son, who is 17 years old, doesn’t want to be like Che either but like Cristiano Ronaldo, and asked her whether I should take him to where they heal the crazy too.”

Among swigs and memories, my neighbor asked me whether I could conjure what was left of the “New Man” now in the new generation. I told him that I’d recently seen a play at the theater where a mother said: “Young Cubans have an airplane in their heads, they just don’t have opportunities of ever boarding it.”

If we were satisfied with paraphrasing we could say, all jokes aside, pioneers of political ostracism and imprisonment, that we would make our great escape a dream and say farewell to all the speeches and committees. The latter, the CDR (Committees in Defense of the Revolution) are a spying and controlling institution that continues to ensure the “democratic” elections here in Cuba, from the ground up.

There are no official statistics that tell us how many young people break free and emigrate per month, or annually. The truth is that the “New Man” in Cuba today, searches for a country, a society which stops telling them that “everything is ok”, when in fact everything is going badly and isn’t really going anywhere. A country that “increases” its Gross Domestic Product (GDP) every year, but the quality of life, expectations and aspirations of its people remain unchanged. A country whose leaders say it’s making progress, but it continues to be stuck in the same rut. Unless, walking around in circles is making progress.

“Obama knew what he was saying when he suggested that we look towards the future, alongside our telecommunications,” my neighbor said and laughed. He poured out the last of the rum in the flask into our cups and sighed. “I’m fed up of so much historic past, my sons and my wife too.” Here’s another likely image of Cuba’s “New Man” today: not having his eyes on the back of his head even though they keep selling us the face with a red neckscarf. Looking towards the future without having to carry this heavy burden of historic memory.

We know already. Without having diverse points of view, there is no future, unless it’s a authoritarian future founded upon imposition and arrogance. Today’s New Man will reject this reality day after day in the 21st century. He will be rebellious and answer back even if they try to silence him, and because he thinks differently, he’ll be marginalized and excluded. Another likely image which is no longer a utopia. Saying No when he has to say no. The consequences will come, but at least it wouldn’t have been in vain.