In a new study published on the Island 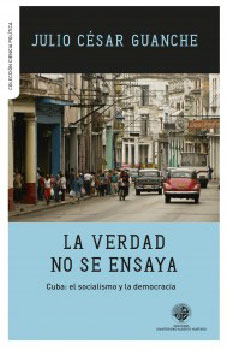 HAVANA TIMES — According to a popular saying, you can let a lie run for many years, but the truth, once freed, will catch up to it in a day.

Those who pick up a copy of The Truth is not Rehearsed (La Verdad no se ensaya), a book written by Cuban law expert Julio Cesar Guanche and published by Cuba’s Caminos publishing house, will likely remember this proverb.

As remarkable as the book’s contents is the fact that it is the fruit of Cuban authors who live and work in Cuba, and that it is published by a well-known publishing house on the island.

While it is true this publishing house enjoys a certain degree of autonomy with respect to Cuba’s government-controlled structures, the publication of a book of this nature and its sale at official State bookstores is as unexpected as the imprudent remarks of a kid in a certain children’s tale, in which an emperor goes out into the street without any clothes on.

I have never before come upon such solid, well-founded and critical observations regarding the political and social system which began to be established in Cuba in 1959, as the ones he found in this book.

The author draws from an abundance of theoretical and methodological tools to study and rigorously take apart the foundations of our country’s political, ideological and governmental system.

The results of this analysis reveal a curtailment of democratic and participative mechanisms which has had catastrophic consequences for the lives of Cubans.

It would be hard to offer those who are unfamiliar with Cuban reality a coherent summary of Guanche’s book that is at once comprehensive and concise. As befits an experienced jurist, political scientist, historian and essayist, the text delves into each of the different issues rigorously and in depth, making any ill-intentioned distortions or superficial criticisms next to impossible.

To refute the arguments exposed, one needs to rise to the writer’s stature. What’s more, one cannot simply dismiss the author as a paid lackey of foreign agents who manipulate the truth at their convenience. The truth is that the emperor isn’t wearing any clothes, and an implacable finger points out all of his naked features.

I should also point out, in honor of the truth, that Guanche’s position is one of optimism and respect towards a system which, in his opinion, ought to be improved, not destroyed. His point of departure, simply, is that one must conduct an honest diagnosis of the situation, no matter how much or who it hurts.

Guanche begins his study by addressing what is understood by the “Cuban Revolution”, how it is conceived and who carries out its policies. It is within this context that the historical subject Guanche considers most important emerges, that of a citizenry endowed with a legal status and universal rights.

According to Guanche, the consecration of this citizenry, as the raison d’etre of every national political process, ought to be the ultimate measure of the success or failure of a given process. At every stage in the history of our country, he argues, the revolutionary process has taken steps forward and backwards. Guanche reveals the decadence of those ideologies that unforgivably fall out of step with their times.

In his exposition, Guanche goes on to point out the difference between abiding by a decision and actually fulfilling it. This old strategy has a long tradition in Cuba, which responds to the imposition of unreachable goals on the populace by high-ranking officials.

When the huge discrepancies between the country’s normative order and its actual operational capacity are revealed, questioning the correspondence between ends and means, the legitimacy of the system comes off rather badly.

The topics of constitutional tradition and citizen participation are Guanche’s areas of expertise, as those of us who have attended his interesting talks can attest to.

With respect to human rights declarations, Guanche reveals that Cuba has not kept abreast with its counterparts in Latin America or the international treaties that the island is party to.

The study conducted by the author also reveals that the alleged political sovereignty of the common subject has no real basis in Cuba, leaving the discretional powers of government elites without an effective counterbalance.

The book concludes with an essay on the philosophical and political thought of Raul Roa (Cuba’s foreign minister from 1959-1976), where we come across a number of rather spicy and surprising statements. As it happens, Cuba’s so called “Foreign Minister of Dignity” held the democratic system that existed on the island in the 1940s in high esteem and defended a socialist system that retained the multi-party structure and those freedoms which are today dismissed as “bourgeois” by our media.

The publication and sale of this book is, unquestionably, an unprecedented event in our country. It suggests that the opening of spaces for thought and debate, proclaimed by President Raul Castro, is making headway, slowly but surely. A mere five years ago, the country’s censors would have banned its publication and would have remained deaf to any kind of appeal.

Ten years ago, they would, in addition, have removed the author from his or her workplace. Fifteen or twenty years ago, no Cuban intellectual living and working in Cuba would have even thought of writing such a book.

It is too early to say whether this reveals a tendency towards the real democratization of the debate about our country’s reality. One thing is to grant intellectuals more freedom to write essays, philosophize and debate, giving back to the people the power that is rightfully theirs is quite another.

I cannot but recall how Cuba’s First Vice-President, Miguel Diaz Canel, recently authorized a group of bloggers from the province of Matanzas to continue publishing their posts, in a country where general access to the Internet continues to be taboo.

In any event, I am overjoyed at seeing Guanche’s volume being sold at bookstores and I predict the book will help readers understand and interpret Cuban reality as much as it did me.