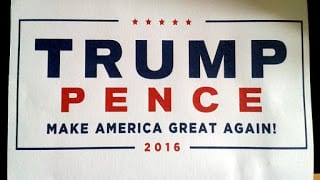 HAVANA TIMES — The New York magnate’s unexpected presidential win had an unusual precedent in the Cuban capital when, on October 21st, a dozen people gathered together at the crowded La Normal Park located on Calzada de Infanta, on the corner of Manglar Street, carrying their handmade posters announcing the Trump-Pence candidacy.

According to what one of the participants, Mario Hechavarria Driggs, wrote on his blog La Santanilla, the small rally was met with a swift response affecting four of the Trump supporters who had been invited to travel to Colombia by the Center of Legal Studies, based in Bogota:

“The State Security Department (DSE) told each of them, in person, that they wouldn’t be able to travel, arguing that the decision was made after they had participated in a pro-Donald Trump rally at La Normal Park in Havana.”

What had been an isolated premonition beforehand is now the talk of other parks in Havana. Let’s begin with the group that always gathers at the Parque Central, where they talk sports and politics:

They struck Obama with thunder when the Comandante wrote his reflections in Granma, [after his visit to Cuba in March] such a verbal attack is not in the interest of any US president.

Well, let them deal with the tough guy now, let’s see if they respect him, they laughed at the other guy [Obama] in his face, give us more, I’m not going to give you anything in exchange, and let our people continue getting chicken instead of fish [in their food rations].

I don’t believe Trump will change anything here in our country, the Castros rule, they´re going to die on their thrones, without caring even a little bit about who is president of the United States. They have everything well under control.

Let’s take a walk over to the Parque de la Fraternidad Americana; a street guide shows tourists the emblem of the US on the gate that surrounds the famous Ceiba tree, planted with the soil from every American nation in 1928.

People voice their opinions with a certain calmness, sitting on the broken down benches because people continue to steal their wood slats:

He beat Clinton because he was determined, firm, and this is essential if you want to come up against the gang we have here in power. (Referring to Cuba’s leaders)

Nothing good lies on our horizon, if the madman who has been elected clenches down, Obama’s policies will end, which had at least made things easier.

Response: It made things easier for those in power to continue benefitting, you carry on with more of the same, let’s see if things have things gotten better for us retirees?

The Consensus is that nobody expected the multimillionaire to win, even the Cuban government media, more or less discreetly, wanted to carry on the game that the US called “Obama’s third term.” After the presidential win, tongues let loose.

This news confirms the PCC’s contradictory foreign policy: dialogue and agreements with other governments and a domestic policy with repression and intolerance. The reason is obvious because Trump has more sympathizers in Havana than what the Castro government wants.