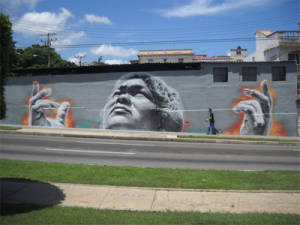 HAVANA TIMES — A friend of mine, very excited, told us that one evening he had walked by G Street and 15th, where he saw people painting on a huge wall on one of the central streets of the Vedado district.

Intrigued by the size of the image, he returned the next day and was shocked by what he believed was more than just a mural, that was part of the launching of the visual arts actions of this year’s Havana Biennial.

“It’s a woman looking up towards heaven as if invoking a miracle,” he told us.

Others who had seen the mural felt the same:

“I don’t know how they (the authorities) left it, because it obviously represents Cuba, the desperation of the vast majority of Cubans…”

Of course as soon as we had the opportunity, we went to check it out for ourselves. My husband, who is a visual artist and does graffiti, became mesmerized by the complexity of the technique, based on spray painting but very effective. This detail could only be perceived by looking closely at the work, but its effect was precisely calculated for being seen at a great distance.

To me, honestly, I was shaken when I saw the drama of the image: the serious expression of the woman who may well could have been Cuba, as they say, invoking heaven with the hope that change will finally come. In her mature face, time was the stigma and the source of suffering.

In the upper right corner of the mural was written the name of the artist: McGregor (1980), apparently indicating the year of his birth.

I would like to congratulate the young painter (at least for how many of us interpret his work). He represented with such strength and lucidity this moment that we are experiencing in Cuba, this protracted impasse, the impasse where many still without raising their hands, hope for or expect the miracle of real consensus from which a visible transformation can be started, not another promise in speeches or in guidelines (which are also dead).

The friend who told us so enthusiastically about the mural seemed to have completely lost faith in the possibility of such a miracle, like so many. But I don’t blame them, of course.

After several months without knowing what had happened to him, we learned that he sold his apartment and somehow made it to Miami.

4 thoughts on “Hoping for a Miracle”