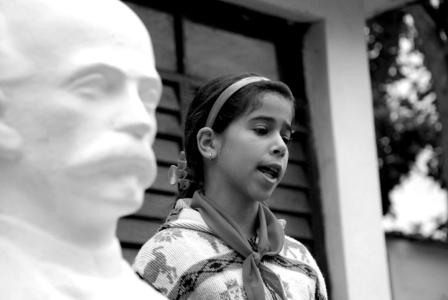 HAVANA TIMES, Feb. 7 — Our societies have always required heroes.  But curiously, they have required them as ideological constructions, as imaginary figures based on a series of virtues, more than as real and concrete people.

I’m sure that if our heroes came back to life they’d be very upset with the way we describe, imagine and supposedly want them to be.  A long time ago they stopped being real beings.  They are described to us — and we learn about them this way — as receivers of monastic Judeo-Christian values of stoicism, austerity, and courage as well as the tendency towards self-immolation.

We can’t imagine them laughing, downing a shot of rum, falling in love, doing something ridiculous or simply saying something nonsensical.  This latter act is something that we all need to do at some moment, though the truth is that some people do it more than others.

The problem is that the heroes have become as cold and distant as their statues — standing or on horseback — but always looking toward the future and possibly pointing toward the horizon with their finger.

They have become mere ideological constructions.  That’s why, I’ll mention in passing, they are all men and the immense majority are white.

On occasion they’re pure inventions.  The Costa Ricans, who have had a fortunate history that has been distant from war, invented a hero complete with statues though no one knows what he looked like and they’re not even sure how he died.

According to legend, a poor campesino named Juan Santamaria joined the campaign against the gringo William Walker and set off a powder keg against the invaders.  It’s said that he died in the explosion, which makes him even that much more heroic.  However it’s also said that he survived and died of cholera, which is not the officially accepted version.  Christened with his name you’ll find parks, streets, schools and San Jose’s very own airport, the least pleasant aircraft facility I’ve ever been through.

But I’m interested in highlighting one point:  By force or by chance, or for both reasons, heroes have been unrepentant travelers and have seldom stayed long in the countries where they are adored by their followers.

Jose de San Martin, the liberator of a large part of the Southern Cone, is worshipped in Argentina, but actually he spent very little of his life in the home of the tango, not even when he was a Spanish viceroy.  He made his life in Europe and returned to it when he was disappointed by his recently inaugurated countrymen.

San Martin was a brilliant and daring military man who would have continued his campaign all the way to the Caribbean if he hadn’t run into another hero while in Peru who was more obstinate than himself: Simon Bolivar.  In support of Bolivar, I should note that he was more of a locally established figure, but even so he spent more than a third of his life marauding through Europe and the Caribbean.

In our islands we weren’t exempt from this abandonment.

– Jose Marti only lived in a fixed place in Cuba until he was 16.  After that time he lived abroad, except for brief incursions onto the island, with the last time being in 1895, when he was killed in his first combat action.

– Eugenio Maria de Hostos, a hero of the frustrated Puerto Rican independence movement, practically left his dear country when he was 13 and returned only for a short time in 1898.

– Ramon Emeterio Betances, another Puerto Rican hero, was born in 1827 and later went off to study in Europe.  He was banished from the island several times between 1858 and 1869.  From that latter year on he lived in France, where he died in 1898.  At that time he was 71 years old, but had only lived in Puerto Rico for about 32 of those years, which included his childhood.

– The case of Juan Pablo Duarte is not any more encouraging.  This hero of the Dominican Republic was only on that half of the island for half of his life.  He was banished following Haiti’s winning of independence but he returned in 1863 when a new generation of patriots declared war on Spain.  I imagine that very few of them were familiar with him and wondered what they could do with an old dreamer in the middle of a horrific war that lasted three years.  They returned him to Venezuela with a fictitious position, where he died years later managing a candle factory.

Possibly for this reason the heroes could imagine new and renovated societies, ones that almost no one else understood and that finally turned out to be inapplicable, like a sort of an unconcluded task that every day the school children of our countries declare will be finished at some time, and that goes on for decades.

I will never forget one of Jose’s Marti more vibrant essays: “The Vindication of Cuba.”  It was a passionate declaration of the fraternity of races in Cuba and the idea that Cubans were above all types of racism and ethnic division.  When Marti wrote it, slavery on the island had been abolished less than one decade prior, and twenty years later a racist war was unleashed that cost the lives of several thousand black Cubans.

Still today, with several anti-racist revolutions taking place around us, Cuban society is seriously racist.  And I believe it just and encouraging that many people have proposed overcoming the Martiesque invitation of being Cuban before being white or black; they have opted for another concept in which we are Cuban and at the same time white or black – and especially black, because what happens in this unitary revelry is that those who always lose are the ones at the bottom.

There’s another important quality that a hero should assume: not to seriously reach power.  Power compels those who hold it to repress, subordinate and test their ideas.  This is when a leader gets dirtied, disappoints, they fall and it’s necessary to put them in a footnote.  The best heroes — the unstained ones — have died young.

In summary, heroes were able to imagine the world from the lightness of extraterritoriality and from the vantage point of utopia.

Even so they were grand, admirable, truly inspiring and revolutionaries.  We are missing the point when we imagine them as boring or riding atop horses with grandiloquent expressions – especially when we want our children to be like tham…to imitate them.

I sometimes fear that the statues of Juan Santamaria, Bolivar, San Martin, Betances, Hostos, Duarte and Marti will jump down from their pedestals and start walking…that they’ll order a beer in some club, and after the fifth round and in a booming chorus they’ll remind us what we haven’t understood from them:  “This is life, you idiots!”

(*) A Havana Times translation of the original commentary published in Spanish on the website: www.cubaencuentro.com

One thought on “Imaginary Heroes”