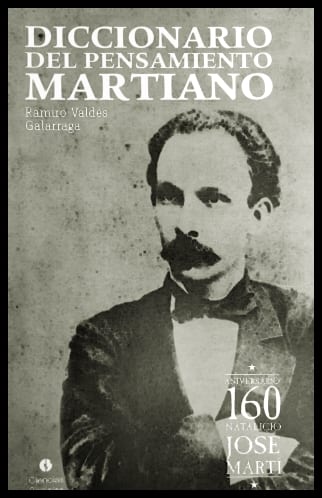 HAVANA TIMES — The interview you’re about to read seeks answers to developments in today’s Cuba in the figure of Jose Marti (1853-1895). Where did I find the answers to these questions? In Ramiro Valdes Galarraga’s Diccionario del Pensamiento Martiano (“Jose Marti’s Thought: A Glossary”), published by Cuba’s Ciencias Sociales in 2013, the 160th anniversary of Marti’s birth.

You mastered our language, how would you describe and recommend its use today?

Words should be used, not to conceal the truth, but to express it. Words are useless if they do not build, clarify or draw people close.

The spoken word also brings people closer than does the written word. Words ought to be a foundation and a trench, not a literary contest.

Also, what words are good in a time of facts? What one does is what remains, not what one says.

How are we to recognize truth?

The facts are the actual truths. Truths are to be measured against themselves and in relation to the places they are published.

Palm trees grow in the countryside thanks to laborious men, the snake hisses in its hidden burrow and the eyes of owls glitter up in the bell towers, but the sun continues to illuminate the breadth of the heavens and the truth advances across the Earth, unharmed.

Truth speaks in a simple language that seduces even the most indifferent of wills, ears resist it in vain: truth has a secret strength that convinces, subjugates and conquers.

To exaggerate truth, however, is to weaken it. To be useful, one need be precise. To be strong, one need commit to truth.

What significance does the press hold to a former, illustrious journalist and correspondent?

The press is not kind approval or scathing wrath, it is a proposition, a means of study, investigation and counsel. The press is a form of power.

In these times of creation, the press cannot be a mere vehicle for news or a mere servant of interests, nor can it be the venting of exuberant and dense imaginations. The press is a watchman that brings everything to light.

No masks can be worn in countries with a free press, which blows through the city each morning like an unruly wind, lifting all masks.

What were your aims when you founded the newspaper Patria (“Homeland”)?

Patria was born to unite and love, and to live in the passion of truth.

Patria was founded to give voice to positive Cuban and Puerto Rican politics.

Patria was born to bring Cubans abroad into a common cause and to save the inevitable revolution, bringing all useful elements into opportune and sincere agreement, from the disorder allowed by those who, always announcing it from afar, if not trying to sell it in secret, did nothing to expurgate it or give it shape, or exasperated it prematurely because of their insincerity and zealous rancor towards the Spanish and their pigmy disdain for working Cubans (Letter to Diaro de la Marina, New York, November 10, 1894).

This newspaper is born at a time of danger, to look after freedom, to make its forces invincible through unity and to prevent another defeat by our enemy brought about by our disorder.

What are corruption and virtue to you?

The corrupt should be denied all social recognition, and they should be regarded as stealthy enemies of the country. Wealth can attest to the glory of frank and decorous labor, but it can also be the palpable proof of ineptitude and shamelessness, as well as a crime worthy of established punishment. To encourage it through violent or secret means brings shame to those who employ these and corrupt the nation where they are applied.

Furthermore, a just principle shining in the depths of a cave is mightier than an army.

There’s no greater insolence than virtue, with its austere countenance, humble dress and white hands, which etches, through contrast, the infamies and criminal craft of peoples…when virtue appears, roads are left stoneless because everyone flocks towards it.

In the great moments of revolution and crisis, even the will to virtue, which rises as late as it does surely, corners those who would disguise themselves with it.

What does the revolution mean to you, who organized Cuba’s war of independence?

Justice, equality in merit, respect towards men, full equality under the law, that is the revolution.

I offer you, without fear of contradictio, this new work, today, when I have no pay to offer you beyond the pleasure of sacrifice and the probable ingratitude of men (Letter to General Maximo Gomez, Santiago de los Caballeros, September 13, 1892).

Revolutions, no matter how individual they may appear, are the work of many wills (Letter to General Antonio Maceo, New York, November 3, 1894).

Those far-sighted and energetic people who love freedom, love the revolution.

Let us complete the revolution with the heroic and evangelical spirit with which our forefathers began it, with everyone and for everyone.