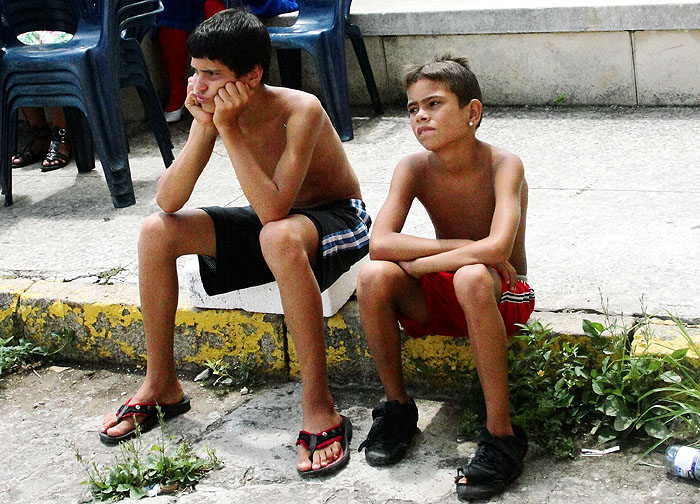 HAVANA TIMES, June 3 — I had promised myself not to write anything else about schools or teachers.  Though I left my adolescence long ago, articles on this subject were making me feel like I was suffering that stage worse than when I experienced it personally.

I myself feel a sense of defeat when I go to the junior high school where my son is…studying (?).  In my post “Farewell to Innocence” I mentioned that his teacher (an alcoholic) seems to have fallen into a deeper crisis over the last few months.  I myself had noticed that he became irritated too easily, even in meetings with parents if some mother made any demand of him.

I found out that a few days ago he brutally attacked two eighth grade students after apparently being provoked by some insult.  The following day a police officer came to look for him in the classroom.  Among his own students, those who didn’t say anything on the record, the rumor was soon going around that he had been fired.  I checked into that but found out that he was only suspended from his position for one month, since the teacher shortage didn’t allow them to apply a more drastic measure.

His pupils — confused — sat there looking at his empty desk.  The other teacher that gives classes in language and literature is preparing for his master’s and is absent most of the time.   Notwithstanding, there’s just a little short of a month before the final exams, which come directly from the Provincial Department of Education.  Yet without any adult to supervise the classroom, the bewilderment has eventually turned into disorder.

My son came home from school upset the other day.  He told me that he didn’t want to go back anymore, that they don’t study anything and that a student took a basketball and had a good time throwing it at anyone who was distracted.

This caused my child to retreat to back of the classroom and sit in a corner, keeping alert so that no one would attack him.  “It’s terrible,” he told me, “You can’t even relax at you’re your desk; they don’t leave you alone.”

As for me — who always insisted that he carry a book with him and read whenever his had a free moment, who equated reading with traveling, who saw literature as a way of enriching oneself with the experiences of others — I’m beginning to wonder if my language and values aren’t obsolete, if they aren’t absurd.

When I’ve gone to that school, on more than one occasion I’ve felt that the logic of my world implodes when I enter that place.  It’s as if it is governed by different laws.  But I took a deep breath and spoke with the head of my son’s grade level.  I asked her if they were actually being taught in their classes, and she assured me that they were; she said that she herself would be giving the math review.  When my son came back from school I asked him and he told me that they did in fact give the review, that everything went well until the first recess, after which they again found themselves without a teacher.  Another disaster!

Every morning he resists more and more when the time comes to leave.  I tell him that he can’t miss school, that it’s important to go, that bla bla bla…

After 10:00 in the morning I’ve begun to notice that I too get anxious, worried.  I look at my watch and imagine the classroom missing a teacher, the children throwing chalk, the yelling, the cussing, the chaos.  Only when it gets closer to 4:30 do I begin to feel some relief.

Wishing he was sick

Another day went by and before sunrise, before the alarm clock went off, I found myself touching my son’s forehead hoping that he was burning up with fever, wishing he would complain of something, that he would have an asthma attack.

More than once I’ve daydreamed about an argument with the educational secretary, with the grade-level head, with the principal: Why don’t they just close the school?   “Why don’t they send the kids home?   All they’re doing is forming a generation of youth without values; they’re contaminating society.  Within a few years we’ll wake up to this lethargy and we’ll be horrified with what Cuba has become!   In my dream I believe I grab them and start shaking them trying to get them to react.

But once at the school and in front of them, I only see his fear, his fragility.  Once again my truths turn pale; they shrink to a faint flicker at the point of being extinguished within these walls.  The grade-level head and the secretary carry themselves with complete assuredness, convinced of their roles.

This time the educational secretary reassured me that she would give the chemistry review, and that though they don’t have a teacher, the group would of course be assisted, that my son wouldn’t lack anything.

When my son gets back from school and tells me that they lied to me, that they didn’t give him any review, I won’t be surprised.  I know it’s dangerous, but I’m beginning to not to be surprised by anything.